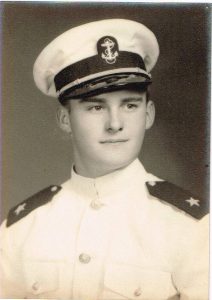 Born June 22, 1925, in Leominster, John was a proud Navy veteran of WWII. He grew up in Leominster, graduated from Leominster High School in 1943, and immediately enlisted in the Navy. After WWII ended, he was discharged in 1946. While attending Boston University, he met his life’s love, Roberta Hackett.

He graduated from BU in 1949. For 35 years, he worked for Burroughs Corp. (now Unisys) as a salesman and sales manager. He then worked for NCR Corp. for another six years. He retired in 1990, and wintered in Venice, Fla. In Venice, he was a member of the Masonic Lodge No. 301, Sarasota Sahib Shrine, the VFW Post 8118, the Evangelical Covenant Church of Venice, and an active member of the Venice Isle community.

Since 1949, after being introduced to Martha’s Vineyard by his wife Roberta, Dad spent summers on the MVCMA Campgrounds. For many years, he was an active member of the Campgrounds, and manager of the MVCMA Museum. For the past three years, he resided at an assisted living center in Canton. There, with his outgoing personality and charm, he was the unofficial “mayor.”

To Dad there were no strangers, just new friends waiting to be met. He is now reunited with his old friends and loved ones. We’re sure he’s making new friends in Heaven. He will be greatly missed by all who had the pleasure of knowing him. Instead of tears or sympathy, we ask that you raise a toast to Dad for a long life well lived. He leaves us with wonderful memories and a great legacy. May we all be so lucky!
He was predeceased by his wife of 67 years, Roberta, in 2015, and by his eldest son, John III, in 1974. Survivors include his four children, Craig and his wife Edie of Oak Bluffs, Gary and his wife Elizabeth of Canton, Nancy (Casey) and her husband Claude of Pawtucket, R.I., and Timothy and his wife Terry of Oak Bluffs. He is also survived by his brother Charles and his wife Alice of Newbury Park, Calif., his sister Marcia of Leominster, six grandchildren, one great-granddaughter, and many nieces and nephews.

There will be a celebration of his life this summer at the Tabernacle in the Campgrounds in Oak Bluffs.