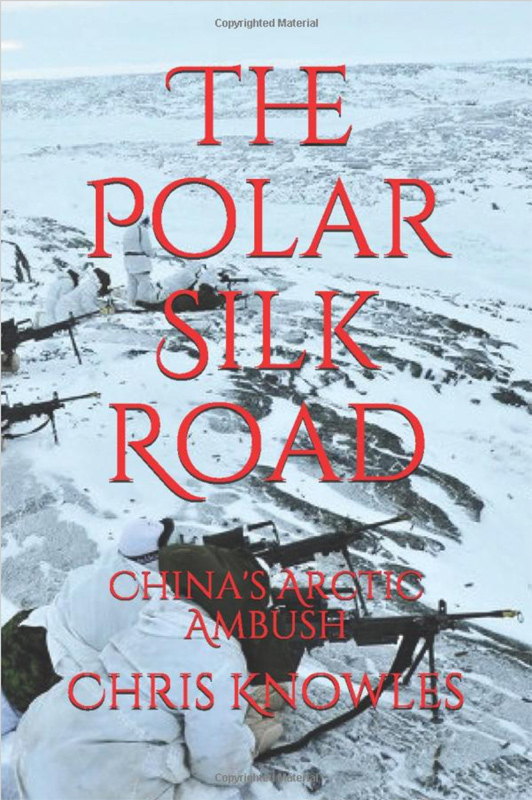 Island author Chris Knowles has given us his 17th novel of political intrigue and his second involving Arctic territory.

He is a child of the intelligence establishment, and a fiendish researcher of weapons, military data, and political thinking. Raised in Washington, D.C., where one of Knowles’ parents worked in the intelligence community, and Knowles himself served a stint in military intelligence during the cold war, an era we might be forgiven for regarding as “the good old days,” considering the postmillennial behavior of al-Qaeda, ISIS, et al.

Having read and reviewed a half-dozen of his novels, several constants emerge for me. One, do not expect Tom Clancy writing style here. Knowles is not a master of dialogue, but he is all about the plot and storyline, and about concrete info, real data about weapons, government customs, and protocols.

That’s where the gold is in Knowles’ work, and in “The Polar Silk Road,” he lifts the curtain on how things really work when world superpowers get sideways with each other. In this case, China and the U.S. get into it over a fictional 2001 China gambit in Greenland, near the polar cap. Their contretemps puts neighbor Russia, smarting over U.S. sanctions for its indiscretion in the 2014 invasion of Crimea, in the catbird seat.

In most national conflicts, it’s about land and money, and Knowles loads up our plate with both motivations in “The Polar Silk Road.”

China had been using the original Silk Road, an overland trade route, from pre-Christian times until the 17th century, before turning to sea routes to move goods to Western markets. Now it sees that shrinking of the polar icecap means an opportunity to go by sea past Russian waters to Greenland, cutting its time and shipping expenses by a third.

Greenland sees the opportunity to upgrade its airports and infrastructure via the yuan. Russia sees a chance to get paid for passage rights and fees. Denmark, Greenland’s big brother, doesn’t have a problem.

So China begins quietly in 2018 to revamp Greenland’s three airports and its harbor docks. Turns out China’s construction crews include lots of intel people, and eventually, lots of soldiers, tanks, and long-range armament. Not to mention naval “escorts” that dawdle in Greenland waters.

See what I mean about plot and storyline?

By 2021, China’s got the finishing touches on its plan, which includes getting its forces and rockets closer to longtime foe Russia and Western superpowers. By this time, the U.S. intel community smells a rat, and eventually we launch a force of men, tanks, and destroyers.

The run-up to the use of military force in Washington is a primer on how things are supposed to work in government with three equal branches of power. The Republicans have held the White House with a guy named John Jefferson, and he listens to his intel and cabinet people in deciding to act militarily.

After a short fight on Greenland turf, we lick the Chinese, but they ain’t done yet. They decide to continue to send destroyers and container ships down the chute past Russia. They’re betting the bluff with Russia, a onetime philosophical ally. But Jefferson and Vlad Putin have done some horse-trading over U.S. sanctions, The Russians sign up with the good guys, and the Russian and Chinese navies get into it.

It’s a short but deadly naval battle. Both sides lose ships and take casualties, but the Chinese lose,and divvying up the spoils of political war begins.

I’m a guy who regards changing my oil as a highly technical matter, so Knowles’ habit of reciting armament nomenclature and capabilities in infinite detail loses me. But as we learn how the Russian helicopter capabilities turn the tide against five Chinese destroyers, the info was useful. Technology works.