There were 60 lucky diners Friday night at the Martha’s Vineyard Museum, feasting on the scintillating flavors of Brazilian food in the glamorous setting of the Linnemann Pavilion, with music filling the air.
The night was a collaboration between Chef Zandro Souza, who works at Art Cliff Diner, along with his wife Fernada, cooking up a storm, and educator, journalist, interpreter, and MV Times columnist Juliana Germani, who taught us about what we were savoring.
Katy Fuller, director of operations and business development at the museum, explained the night’s origins. “Zandro repeatedly told Gina Stanley [owner of the Art Cliff Diner] that he wants to give back to the community and share some of his Brazilian heritage,” Fuller said. “Juliana has worked with the museum on so many projects in the past few years. And with Gina taking over operations in the First Light Cafe at the museum, it seemed like the right timing. She really sees the cafe as a community gathering space.”
The museum’s executive director, Phil Wallis, emphasized this idea as well in his welcome. “We’re trying to reach out to the broader community and try some new things,” he said.
The venue was certainly a gathering place, and there was a diverse group of people who came. “I came because we are recent wash-ashores, and thought it was one of those events that’s going to help me get integrated into the community,” Pam Coblyn said. “We are members of the museum, so it checked off that. We liked to eat, so it checked off that. We know the Brazilian community is so important to the Vineyard, so I want to try and do all things that will help me find my way here, meet people, make friends, get interested, and develop a network.”
Her husband Chip was more focused on the culinary aspect of the evening. “I love to cook foods of different cultures, and I’ve never dined Brazilian,” he said. “I came to learn from the best, and it’s something else I could add to my cultural cooking.”
Guest and museum docent Ned Sternick said he came because “the Portuguese-Brazilian community is so important here. I wanted to learn more. The museum is very community-oriented, and so everything we can learn about the Brazilian community is important, particularly in the guided tours that I do as a volunteer.”
Before the meal was served, Germani shared, “Brazil, much like the United States, is a melting pot of many cultures. Brazilian food represents every other culture that has lived there. We put a little touch of each in our own flavors. I love how we incorporate Italian food and Japanese food and indigenous peoples’, and that of the slaves who brought their own traditions.”
Germani explained how the menu represented different regions of the country. The Salpicão, a shredded chicken salad with carrots, raisins, and corn, was typical of the southwest area, where most Brazilians on the Island come from. The silky Bobó de Camarão, cream of cassava and shrimp soup, comes from the northeast part of Brazil.
The Feijoada, a rich, dark-flavored black bean and pork stew, Germani says, “is something the slaves used to make. The slaves would use the leftover pieces of pork from their owners’ dishes, and they would mix it with beans. It’s an African-inspired dish that’s become very much Brazilian. It has become a staple.” She said that in Brazil, the dish is generally served on the weekends, and there would be music and family and friends together: “It’s a memory that anyone you talk to in Brazil would be able to understand what that memory feels like. It’s our cultural heritage.”
Another delectable item on the menu was Escondidinho de Carne de Sol, a gratin whose white top was made from mashed yuca — a prevalent ingredient in Brazil — and parsnips topped over a beef jerky. It was sprinkled with super-thinly sliced Couve Refogada — sautéed kale. Side dishes included a fascinating Chuchu, which is roasted chayote squash. Germani explained, “Chuchu is an endearing term in Portuguese, meaning ‘sweetie.’ One of the vegetables that immediately comes to mind when you think of Brazilian food.” There were also fried plantains that kids in Brazil swipe from the kitchen.
The meal was rounded out with a lovely Mousse de Maracujá, or passionfruit mousse. “The fruit is ubiquitous,” Germani said. “It’s in the lotions we use, the soaps we bathe with, kitchen staples.” We also found little chocolate and orange doughnuts nestled on the plate, just in case diners were still hungry.
Memories played a big role in what Zandro chose to make. “Figuring out the menu was hard for me, because food in Brazil is very important, and you always receive a friend and family in your kitchen. Your kitchen is always cooking,” Zandro said. “I learned by watching in my mom’s kitchen. What I put together were things I grew up with, and that brought up some memories. It is impossible to have a full experience in only one dinner. But things I put in there bring us memories. It’s comfort for us.”

The event is the first of a series of dinners, luncheons, and other food-related programs in collaboration with a number of Island chefs. Check the M.V. Museum website for upcoming opportunities. 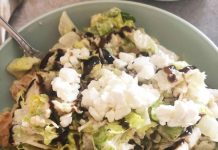 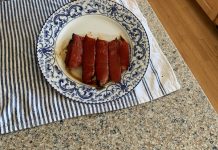 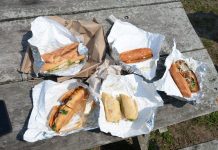