Groundhog Day might be my favorite holiday. It’s not that I have any particular fondness for rodents. And the six more weeks of winter business is, of course, utter nonsense. But the start of February marks a magical time in the seasonal cycle, the point at which I wake up one morning abruptly conscious that we’re closer to winter’s end than to its beginning.

The air grows milder: We’re a week or so past the day with the coldest average temperature. Day length, which has been getting longer since the solstice in late December, has finally extended enough to make a real difference. With the longer days come higher sun angles; with less atmosphere to slog through, each ray of sun arrives a little brighter, a little warmer.

Pairs of red-tailed hawks sit companionably on adjacent snags, or soar and swoop and briefly lock talons in aerial play. They’ve ignored each other all winter, but shortly they’ll be adding a few sticks to the nest, mating, and laying eggs. Ducks bob their heads in comic courtship, and herring gulls lose the dusky crown and nape feathering of their winter plumage, their heads suddenly round and pristine white, like golf balls. In our front yard meadow, a few clumps of grass find that they’re getting enough sun, on average, to make it worth turning a bit green and making a tentative grab for the sky.

My own personal organism also senses the change. The winter blues start to fade. I start making plans for the future instead of just glowering dully at the present. On my weekly Saturday stroll to the Post Office, I find myself whistling — whistling! — and I pause occasionally just because it feels nice to be outside, and alive.

It happens every year, yet it always catches me by surprise.

For a naturalist, perhaps the best aspect of this moment is the resumption of bird song. From mid-December to late January, silence reigns: Even the Carolina wrens shut up, and while you may hear some chirped call notes from the thickets, they sound like complaints, not invitations. But one day, the local wrens wake up feeling a bit randy, or territorial, or maybe just happy, and the rolling, metallic notes of their song ring out through the neighborhood.

Other species join in. Chickadees give their two-note whistle (while birds on the mainland pitch the second note a major third below the first one, minimalist Island chickadees, famously, keep them on the same pitch). Tufted titmice, established on the Vineyard only in the past couple of decades but turning up everywhere now, toot out their inquisitive “Peer!” song.

The shrunken vocal apparatus of our local song sparrow, whom I haven’t seen much lately, starts to rebound. The bird pops up onto a wire, first time that far off the ground in weeks, and gargles out a song. It’s partial, imperfect — but it’s a start. He’ll get better, and quickly; the longer days will trigger a burst of hormones, enlarging the gonads, putting a figurative little chip on the bird’s shoulder, and restoring the syrinx — the bird’s “voicebox” — to its former glory.

Then the house finches start. An odd case, this species, and for much of the year it’s hard to muster much enthusiasm for it. Really a bird of Western North America, the Eastern population descends from a group of caged birds deliberately released in New York some decades ago. Now the species — its drab, streaked females, its males with garish red on their crowns and throats — spans the continent, the original population and the expanding, introduced one having met up again. Somehow it just feels wrong.

But man, can they sing! From rooftops, treetops, wires, or even from the apex of towering flights, the males let loose a prolonged jumble of musical notes, ending almost invariably in a long, shrill tone. There’s no melody there, no apparent structure; it’s a song of pure exuberance, belted out as if the bird simply can’t keep it in any longer, and the first time I hear it each late winter, it stops me in my tracks. I never realize how much I’ve missed it until I hear it again. For a week or two, they’re my favorite bird.

Soon the cardinals will join in, the piercingly red, crested males giving a loud, clear “Cheer! Cheer!” or “Peter! Peter!” song, and the duller females flitting up to the tops of their thickets to see what the fuss is about.

Oh, the season will have its setbacks, for sure: cold days, or even cold weeks; the odd blizzard, or two, or three. But overall, the momentum is now is forward, to warmth, migration, the end of dormancy, the seasons of light and growth.

I’m a little late, I know. But Happy Groundhog Day. 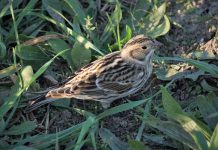 Going to school on a schooner

The myth of Thanksgiving