Led by Zach Utz with a sixth-place finish in the mile run, and Charlotte Packer’s seventh place in the shot put, nine Vineyarder runners posted top 10 and top 20 finishes at the Last Chance indoor track meet at the Reggie Lewis Center (RLC) on Saturday.

The Last Chance is an annual event designed to give athletes a final opportunity to qualify for the state championships, to be held next weekend at RLC. The Last Chance is all about time. Athletes must finish within time parameters set by the Massachusetts Interscholastic Athletic Association (MIAA) to qualify for the state championship field. Athletes who have already qualified use the final pre-state meet as a tuneup.

Annabelle Biggs finished ninth among 59 runners in the 300m. JoJo Bonneau dropped a quarter-second from his preliminary race time to finish 10th in the 55 hurdles. Senior captain Catherine Cherry finished 10th in the grueling two-miler, and the girls 4×800 relay team was fifth.

MVRHS Coach Joe Schroeder believes his charges are primed for the state championships in the team’s sixth season of indoor track competition. 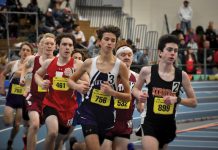