The Vineyarder boys hockey team won its 10th game of the season Wednesday night against Mashpee/Monomoy (M/M) in a 4-3 thriller on Elias Gubderson’s game-winning goal in the waning minutes of the game.

The Vineyarders (10-5-2) have qualified for the south sectional tournament in March and are playing for seeding in the annual state hockey tourney.

Martha’s Vineyard Regional High School (MVRHS) freshman goalie Alex Walsh picked up his first career win in a game that looked like a rout early before turning into a nailbiter.

Scott and Pete Gillis all scored in the first four minutes of the game but M/M roared back with three goals to tie it after one period.

The Purple outshot M/M 20-2 in the second period but were unable to light the lamp. The score continued until Gunderson scored with 4:07 left in the game to break the tie. Game scoring assists went to Zarba, Nick Rego, Liam and Aiden Marek and Logan Araujo.

The Vineyarders now gird for the annual Fairleigh-Dickinson tournament this weekend at the MV Ice Arena. 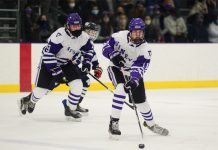 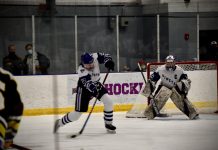 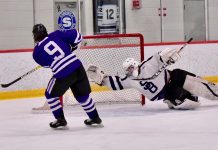