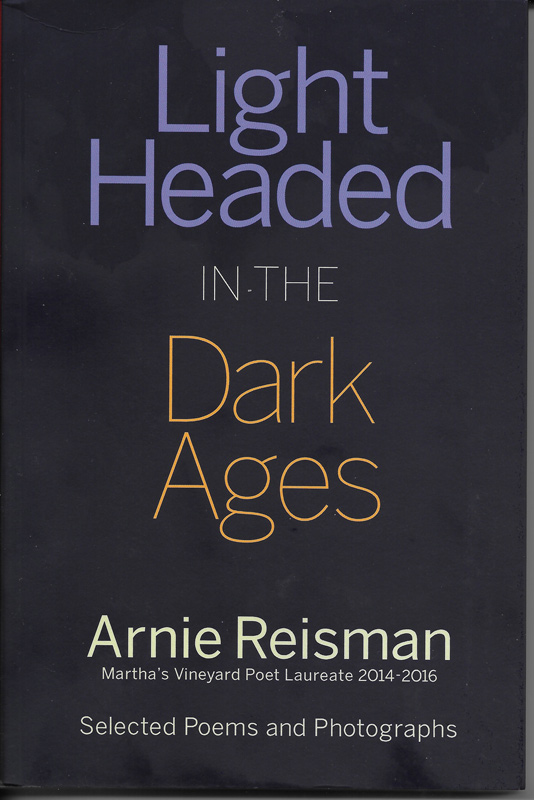 For readers looking to banish the doldrums of late winter, welcome to the Big Top Circus of Arnie Reisman’s newest poetry collection, “Light Headed in the Dark Ages: Selected Poems and Photographs.” His poems are a three-ring circus of verbal high-wire acts, tumbling and soaring across the pages. Reflecting Arnie’s long career in radio, television, and film production, his poetry is dynamic and theatrical. Like an acrobat, Arnie alters phrases, turns clichés on their heads, bounces one word off another in wild riffs. And like all circus acts, high-wire or grounded, the clowning and daring of these poems acknowledge the underlying gravity of human experience. The accompanying photographs highlight Arnie’s quick eye for the visual joke, his whimsical and downright funny angle of vision. They also pay tribute to Paula Lyons, his wife and partner on NPR’s radio quiz show, Says You.

Many poems in this recent volume explore the meaning of love in wordplay that is lively and jaunty and nimble. “Music to the End of Chance” imbues love with a Casablanca hue: “Brought together by a muted trumpet / Across a longing they burn into the dance.” In “Romance & Relativity,” love dances with Einstein’s time, “As stars and theories / would have it, we are together / Our past brought into the present.” And sometimes in these poems, as in life, love is “Not to Be”: “She raised poodles / He raised hell / He grew orchids / She grew weary.”

Other poems explore the connections between past history and our present culture. The book’s title poem, “Light Headed in the Dark Ages,” takes on the barbarians of the past, who “ushered in 600 years in reverse / Crawling back to the fire and the wheel,” and the barbarians of the present, “They’re back!!!” The tone in these poems about history and culture is often free-wheeling and bantering, but make no mistake, as the speaker says in “Close Encounters With the Third Reich,” “I live for the millions lost in my family forest.” The poem knows all about fear and complacency, but also the necessity of facing the dangers: “If you hear vultures, think show-time.”

Arnie, who was Martha’s Vineyard Poet Laureate, 2014-2016, evokes his delight in living on the Vineyard. In “A Season in Limbo,” the speaker finds that “fortune moved me to my island / Off the New England coast of contrariness … Where there’s more talk of words than the weather / … And I am just as pleased as can be” to breathe the Island air. He finds the Vineyard, “A den of mothers and fathers of reinvention,” where “The lobsterman next door has a doctorate in psychology / … Our plumber welds anachronistic hardware into sculpture.”

“Midnight in Aphasia,” a long poem at the center of this collection, seems at the heart of Arnie’s stance toward the world: a meditation on all the possible responses to the fact that “Everything must go.” In language by turns wry, hilarious, and grave, he writes, “We look to the stars with wonder / and wonder how they could / leave us here in the dust / and destined to wander / staring into windows of the wind / we have the promise only to stay curious.” Arnie Reisman’s inventive poems reveal a writer determined, perhaps destined, to remain alert and curious, his thinking nourished by a lifetime of reading and a willingness to share his joy in “whistling past history’s graveyard.”