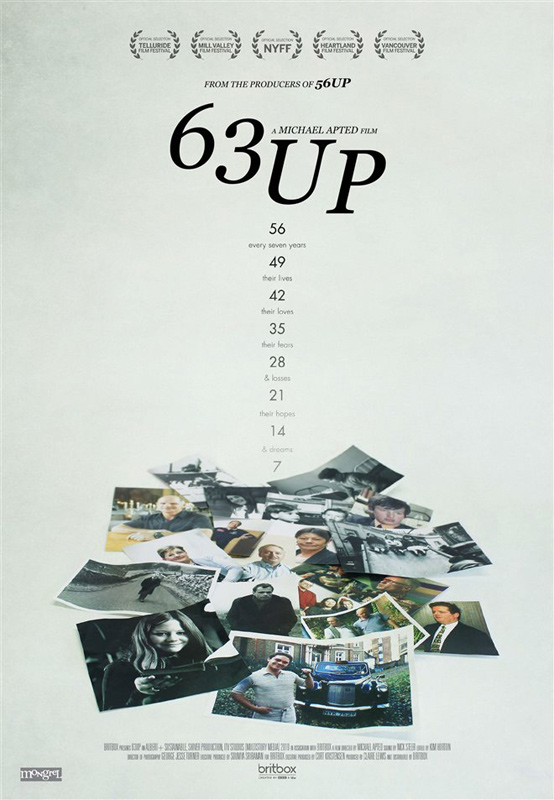 The latest installment in the acclaimed documentary series by director Michael Apted, “63-Up,” is playing this weekend at the M.V. Film Center. Beginning in 1964 with “7-Up” when the participants were 7 years old, it’s the ninth film to follow the lives of the same group of Brits every seven years.

Film critic Roger Ebert called the series among the 10 greatest films of all time, and others have been equally celebratory. Some critics argue the films are too dominated by the views of Apted, who also directed “Gorillas in the Mist” and “Coal Miner’s Daughter.” The director Apted’s premise began with Aristotle’s aphorism, “Give me a child until he is 7, and I will show you the man.” Apted selected 14 children from a variety of schools and social classes for the first version, which was directed by Paul Almond for Granada TV. Apted has directed the rest.

The initial premise of the films was that class structure would determine the outcome of the participants. The 14 started out with a group visit to the London Zoo. As the films continued, the emphasis shifted more widely to concerns of religion, family, class, happiness, and emotional state, as well as the future. “63-Up” deals with losing parents, addressing adult children, and handling illness. Apted also asks questions about Brexit and Trump.
Not all the “7-Up” participants have remained in the film. Charles dropped out after “21-Up,”and John didn’t participate in two of the films. Suzy skipped “63-Up,” Symon missed one film, and Peter, three. Lynn, a librarian, died in 2013.

In “49-Up” the subject named Jackie was critical of Apted’s emphasis on domestic issues, marriage and family, for the women, compared with work and politics for the men. There have also been fewer women out of the 14. The range of outcomes for the group is remarkable, and not always what Apted predicted.

Andrew is one of the upper-class representatives, and after Trinity College at Cambridge works as a solicitor. Sue, who attended the same primary school as two of the three other women, works as a university administrator at the University of London. Tony aspired to be a jockey, but has ended up a taxi driver.

Paul went to a charity-run boarding school, and has ended up in Australia doing odd jobs and maintenance for a retirement village. Symon, from the same boarding school, is the only biracial member of the group. Nick works as a nuclear physicist in the U.S. at the University of Wisconsin–Madison. He is suffering from throat cancer. Neil spent seven years crashing in an empty house or living homeless. He has since become involved in politics, starting as a Liberal Democrat. Bruce teaches school at prestigious St. Albans in Hertfordshire.
The impact of the films on its participants has varied. One example comes from Tony. When he picked up astronaut Buzz Aldrin in his cab, to his surprise he was asked for an autograph rather than Aldrin. The influence of reality television became apparent in the ’90s between “42-Up” and “49-Up.” For viewers who haven’t seen the first eight films, it’s well worth the time to watch them all and see how the individuals grow and change. The series is far from over. Apted plans to continue the films, saying he hopes to direct “84-Up” when he turns 99.

Information and tickets for “63-Up” are available at mvfilmsociety.com, as well as for other films at the Film Center. For films at Edgartown’s Entertainment Cinemas, visit EntertainmentCinemas/Locations/Edgartown.com.

Tune in and jam out

Let’s go to the movies

In a good light

Have Faith: Hope and Resurrection