Susan Leighton of Guilford, Conn, and Edgartown passed away peacefully in her sleep on March 1 after a determined and inspirational two-year battle with cancer. Her husband Charlie Leighton was at her side. 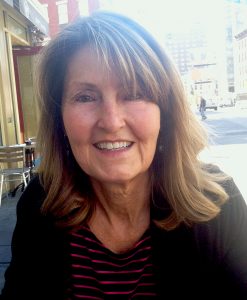 Susan was born in New York City on Sept. 10, 1948 and grew up in Riverside, Conn. After graduating from Greenwich High School, she attended Marjorie Webster Junior College in Washington, D.C. and the University of Arizona. She lived in Tucson, Ariz. and Mill Valley, Calif., before moving back East where she settled in the Connecticut shoreline area, living in Clinton and Guilford.

It was there that she met her soulmate and perfect match, Charlie Leighton of Edgartown. Virtually inseparable, they were married in New York City in 1988.

Generosity and charity came naturally to Susan. Over the years, she served on the board of the ALS Association-Connecticut, was involved with Make-A-Wish Connecticut and was deeply and faithfully committed to APNH (AIDS Project New Haven) and the Christ Church Community Soup Kitchen right up to the end.

Her grace, humor and courageous acceptance in the face of a terrible prognosis were consistent with her life. Her legacy of love, warmth, caring, and giving has made the world a better place.

She was predeceased by her father, William B. Nollman, mother Dorothy Ann Nollman, and sister Patricia Ann Imbres. She leaves behind husband Charlie of Guilford, Conn. and Edgartown, daughter Erin Leighton Huckins, grandson Charlie Huckins and son-in-law Jim Huckins, all of West Tisbury, brother Billy Nollman of Norwalk, Conn. and a slew of people whose own lives were touched by this amazing, giving woman.

In lieu of flowers, contributions can be made online to her beloved charity, the APNH (AIDS Project New Haven), at apnh.org.