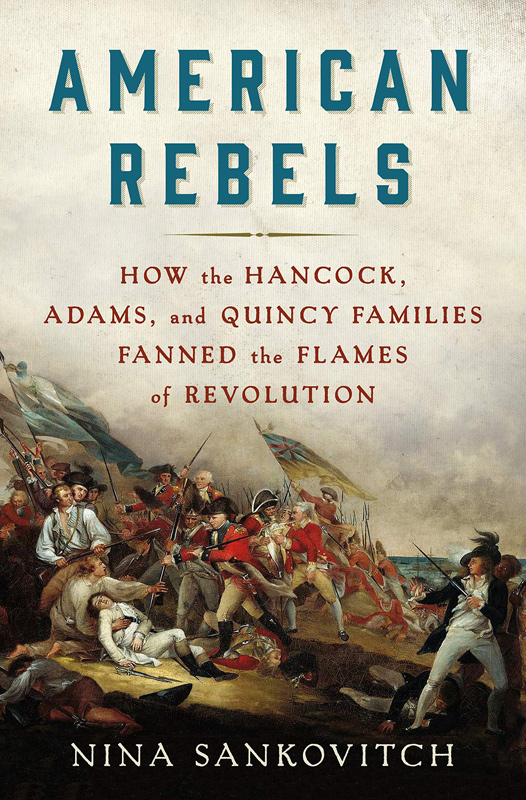 Best-selling author Nina Sankovitch has given us a magnificent, solid work on the life, times and people who helped guide the American colonies to freedom from English rule.

With “American Rebels: How the Hancock, Adams, and Quincy Families Fanned the Flames of Revolution,” the corporate lawyer turned author now has written four books, both in history and in memoir form. Sankovitch caused a fascinating stir nine years ago with her first book, “Tolstoy and the Purple Chair: My Year of Magical Reading,” a memoir about using reading as a means to recover from the grief of unexpectedly losing her older sister to cancer several years before.

Sankovitch read a book a day for 365 consecutive days, a regimen which helped to restore her and which became “Tolystoy and the Purple Chair.” She has applied that same passion and commitment to give us a detailed inside look at how we became the United States and ceased to be a colony of Great Britain.

In tone, “American Rebels” calls to mind David McCullough’s “The Pioneers” (May 22, 2019, MV Times), the story of the settling of the American Midwest in the late 18th century.

Like McCullough, Sankovitch is a reporter and a storyteller in an easy conversational style. And she shares the willingness to painstakingly recreate the real characters and personalities of the stars of her story as they were in the moment, 280 years ago. As a result, they come alive for us. We hope, for example, that John Adams, a son of the yeoman class, will find acceptance and success among Boston’s near-aristocratic Quincys and Hancocks.

Consider this. Sankovitch consulted more than 100 books and articles and drew on newspapers, pamphlets, and the letters of her ‘cast’ to source nearly 1,000 notes to the texts. That is prodigious work and it allows us to understand the life, times, feelings, and personalities of the men and women on both sides of the colonial issue.

As the book title suggests, “American Rebels” has a focus on the Hancock, Adams, and Quincy families, prime movers in the American Revolution. But it is more than that. We meet all the other players: commoners, British military, and provincial leaders.

That tone and approach lets readers easily stride through the decade of events leading to the battles of Concord and Lexington, the best-known flashpoints of the revolution. But there were others, mostly lost in history, that Sankovitch brings to the forefront.

One flashpoint involved the shooting death of 11-year-old Christopher Seider by Britain loyalist Ebenezer Richardson, a Boston storekeeper, in February 1770, just a week before the Boston Massacre. The Boston Massacre got the headline in history but young Seider was the first American to die in the conflict and his death no doubt contributed to the ire of Crispus Attucks and the other colonists on State Street the following week.

Events like Seider’s death tore at the fabric of the relationship between Great Britain and her American colonists, a break which was completely rent five years later on April 19, 1775 on a bridge in Concord, Mass.

Sankovitch has combined detailed research and reporting and a critically straightforward conversational writing style that puts her readers in the hearts and minds of participants and, more important, offers us fresh perspective of the events leading to revolution here.

In “American Rebels,” we get takeaways on the root causes of revolution. Truth be told, most of us were content being English subjects until the 1770s. Then the Brits began messing with our money (taxes) and bullying us. That got us hot. And a second phenomenon, a cultural shift building for several decades in this country, kicked in. Religious thought shifts had led us to believe that getting to heaven was not a lottery, that self-determined good works gave us a heavenly key.

We applied that sense of self-determination to the secular world as well: if the British were going to mess with us, then the hell with ‘em, we didn’t need them. Still, it took another five years for the revolutionary party to begin.

That’s the genius of Sankovitch’s scholarship and storytelling. As readers, we “get” the American Revolution in ways and at a depth most of us have never known. Revolting against a colonizing government ain’t easy. In fact, we have only two successful examples (Haiti is the other) of a people wrestling freedom from colonizers to form an independent country.

You will do yourself a favor by reading about this one.