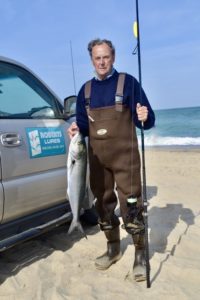 He was born October 1, 1937, to Albin and Helen (Petersen) Johnson of Norwood, MA and graduated from Norwood High School. He was a 1959 graduate of Dartmouth College where he majored in Physics.  Peter was in Navy ROTC in college and received his commission upon graduation. He was assigned to Naval flight school and received his wings in 1960. He was an A-4 carrier pilot. After serving in the Navy, Peter started a career in the defense industry by joining Sanders Inc in Nashua, NH.  Other employment included Lab-X, Sippican and Tekla Research and consulting work.

He was an avid fisherman and that was reflected in his business ventures later in his life. Peter was the former owner of Larry’s Tackle in Edgartown. He and his wife Lena became the owners of Robert’s Lures in 1997, and later also bought Hammer Lures and Yankee Lures. Peter will be missed but Lena will continue the business. His love of fishing went beyond merely owning and running these businesses. He continuously developed and tested new designs, and always had time to talk with other fishermen.

He was often found on the beaches of Martha’s Vineyard enjoying a walk along the beach or fishing. He was well-known for sharing his extensive knowledge of fishing and lures with fellow fishermen. Peter was a longtime member of the Martha’s Vineyard Surfcaster’s Association and the 2017 recipient of their sportsmanship award. He was well-known as a contributor to charitable events on the Island, including the Wounded Warrior program.

Peter leaves behind his longtime wife and partner Lena Thunholm of Newport, NH. He also leaves behind many children: Peter D. Johnson and his wife Rosalbina of Lutherville, MD; Scott Johnson and his wife Francoise of Newmarket, NH; Chris Johnson and his partner Sylvia Massy of Ashland, OR; Holly June Connell and her husband Jim of Ashland OR; Gail Arhangelsky and husband Mike of Palm Harbor, FL,; Frederick Jordan of Miami, FL and Edward Jordan of Tacoma, WA. He also leaves behind three great-grandchildren and his five grandchildren Erin Garcia of Thousand Oaks, CA, Carrie Sailstad of Dunedin, FL, Meredith Johnson of Thousand Oaks, Ca, Taylor Queen of Lyndeborough, NH and Adam Queen of San Jose, CA.

There will be a celebration of life at a future date to be held at Wasque Point, Chappaquiddick.