With all of us closeted at home, it’s been a good time to watch the movies we’ve missed or didn’t know about. Here are some of the films I’ve watched and enjoyed at home On Demand.

I previewed “Bombshell” last December, but it was before the film was released. It’s one not to be missed. Documenting the climate of sexual harassment at Fox News while Roger Ailes (John Lithgow) was in charge, it stars Charlize Theron as Megyn Kelly, Nicole Kidman as Gretchen Carlson, and Margot Robbie as Kayla Pospisil, all working for the network. The film’s Oscar for Makeup and Hair Styling was well-earned, with Theron in particular transformed to look like Kelly.

The three women were caught up in Ailes’s web of manipulation. Each aspired to be on-air at Fox, and Ailes made it clear that sexual favors were the way to make that happen. Kelly appears as one of the network’s most popular newscasters, and viewers see her interview Donald Trump at the May 2016 Republican debate. She challenges him about his abusive attitude toward women but in a later interview softballs him to her husband’s disgust.

A composite of actual Fox newscasters, Pospisil is the ingenue who ends up on the “The O’Reilly Factor” by acceding to Ailes’s advances. After Carlson, co-anchor of “Fox and Friends,” is demoted for her stories on women, she risks suing Ailes and wins. The rest is history and the beginning of the #Metoo movement.

“Ford v. Ferrari” was in the running for this year’s Best Picture Oscar and won Oscars for Film Editing and Sound Editing. It might seem like a movie best suited to the masculine world of auto racing, and I confess that’s what kept me from watching it when it first came out. Definitely a mistake. Matt Damon plays car designer Carroll Shelby with Christian Bales as Ken Miles, the race car engineer and driver who works with him. Bales won a Golden Globe Best Actor award. Like “Bombshell,” “Ford v. Ferrari” is a docudrama based on the real story behind the 1966 race.

With urging from Ford Motor Company V.P. Lee Iacocca (John Bernthal), Henry Ford II (Tracy Letts) tries to buy the prestigious Italian car company run by Enzo Ferrari, but his offer is summarily rejected.  After Ford decides to challenge Ferrari as winner of the 24-hour Le Mans competition in France, Shelby and Miles team up to build the American company’s winning Ford GT40 Mk I. Shelby had won the Le Mans race in 1959 but retired because of a heart condition.

The friendship between him and Miles balances the technology involved in creating and testing the new car. How the two work out the design flaws becomes an intriguing element of the film. In anticipation of Le Mans, Miles wins the Daytona 500 by pushing the car to 7,000 rpm. It’s an exciting part of the movie, and the Le Mans race is equally so, especially after the car’s door won’t shut and later the brakes fail. The end of the race comes as a surprise, as does the end of the film.

It’s hard to believe I could have missed “Judy,” the biopic that won Renée Zellweger an Oscar. She certainly earned it for her powerful portrayal in the movie about celebrated songstress Judy Garland. “Judy” picks up on Garland’s life when the singer is past her peak. The flashbacks inserted in the film take her back to her youth when Garland was catapulted to fame at 16 by her role as Dorothy in “The Wizard of Oz.” She won a special Oscar for her performance.

The flashbacks suggest how Garland’s controlling mother, as well as studio producer Louis B. Mayer, influenced her to become an alcoholic dependent on barbiturates. It’s a tragic story of great talent destroyed by the reliance on drugs and drink. Besides illustrating Garland’s troubled life, the movie also shows her love for her children, actress Lorna Luft, singer Liza Minelli and actor Joey Luft, each of whom went on to success.

“Judy” doesn’t spend time on Garland’s film career, but her role in the 1954 film “A Star Is Born” earned her an Oscar nomination as well as another for her performance in “Judgment at Nuremberg.” She died of an overdose in 1969 at the age of 47.

“Blinded by the Light”

A film that did not win much attention last year but should have is “Blinded by the Light.” The heartwarming story of Javed (Viveik Kalra) a Pakistani youth growing up in Luton, a suburb of London, during the 1980s, it’s based on a true story. In the film’s Reagan/Thatcher era, Great Britain was in economically poor shape, with tensions between its working-class whites and Pakistani immigrants. Javid and his family are persecuted by their neighbors, and at age 16, Javid feels trapped by his dominating father’s insistence on Pakistani culture.

Everything changes when a classmate lends him cassette tapes of Bruce Springsteen. Javid is captivated by Springsteen’s lyrics of social commentary about the working class, and the film is filled with the Boss’s songs. A poet who also writes lyrics for his white friend’s band, the teenager begins to find himself as a writer with help from his English teacher and unexpected encouragement from a neighbor.

Javid is trapped between his family’s Pakistani culture and the British world of Luton. With Springsteen playing on his headphones, Javid begins to favor British life, changing his hair and clothes and finding an English girlfriend. His struggle with the strictures of his family continue to haunt him, but he works to find a solution that allows him to embrace both worlds. Although “Blinded by the Light” has its sentimental side, its theme about immigrants is certainly relevant for American viewers. 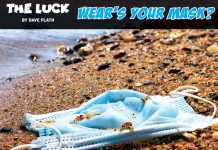 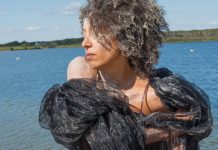 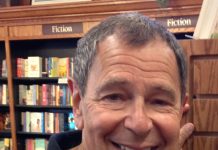