When you stand inside the Steamship Authority ticket office in Vineyard Haven, you’re standing on the site of one of the most storied maritime gathering spots in town — the E. St. Croix Oliver store.

Oliver’s first captaincy ended in catastrophe. While sailing from Cadiz, Spain, to Boston through high seas and intense cold in early 1869, bearing a cargo of cork, 1,200 tons of salt, 300 casks of wine, and a crew of about 17, his ship Harry Bluff struck South Shoal off Nantucket. The hull was ruptured and its cargo of salt began to dissolve, so Oliver and his crew were soon forced to abandon their increasingly topheavy ship. Two crewmen fell in and drowned, and two more froze to death, as they spent the next 24 hours drifting in an open longboat. Eventually, the badly frostbitten survivors were rescued by a passing ship.

Oliver’s second captaincy ended in disaster as well. In 1876, while sailing from England to San Francisco with a load of coal, Oliver’s ship Garnet lost its rudder, split its stern post, and “became unmanageable” while rounding Cape Horn. His ship was lost, but his crew saved.

Oliver’s third and final captaincy ended in his arrest. Shortly after his ship Cashmere anchored in Boston in December 1879 after a 150-day voyage from what is now Malaysia, charges were brought against Captain Oliver and his first mate, Mortimer Van Kleek. Van Kleek fled, but U.S. marshals tracked him to Brooklyn and took him into custody. The crew alleged that Van Kleek had brutally killed one, possibly two, of the crewmen while Captain Oliver stood by without interfering. One crewman claimed that the mate beat him with a belaying pin, and that the captain sanctioned that action as well. The story made national news. “The seamen make astounding reports of cruelty practiced on board the ship,” reported the New York Times. “The crew say ill-treatment was common on the ship,” wrote the Chicago Tribune. “Barbarism in the Ocean Service” read the headline in a Memphis paper. Oliver was brought up on a second and third charge of beating and wounding two other crewmen.

At least two of the charges against Oliver were ultimately dismissed, but the full outcome of the trial is unclear. In any event, Captain Oliver found himself forcibly retired from the sea at the age of 45. He retreated to his wife’s hometown in New Jersey long enough to start and bankrupt a real estate partnership, then bounced into the small-but-important maritime port known as Vineyard Haven.

Oliver and his wife settled on the Island in 1882, and opened a ship chandlery and grocery store at the head of Union Wharf (which, by 1899, also became the terminus of the electric car track to Oak Bluffs). When the Great Fire of 1883 burned down all of downtown, Oliver’s store was said to be the only place of business left standing.

Captain Oliver sold maritime equipment like oars and anchors, but he also sold paints and brushes, charts, clothing, patent medicines, and even advertised himself as a “yacht builder.” The 1883 fire had burned down the Vineyard Haven Town Band’s practice space, but their instruments were not destroyed, and so the band moved their practice room to the sail loft over Captain Oliver’s store.

The late Stan Lair of Vineyard Haven recalled in a 1979 recording, “[On the] corner of Water and Union Street [was the] Capt. St. Croix Oliver Store. On the roof, in large letters, was painted ‘SAIL LOT.’ Now, I don’t know what they did in the sail lot. I presume they manufactured sails. Probably laid them out and sewed them, and all that. Anyway, it said ‘SAIL LOT’ on the top of this building. The trolley line from Oak Bluffs ended here too, right on this corner.”

The store became a local hangout, and a source for maritime news. When the Boston Globe approached Captain Oliver in 1887 for a comment on a missing ship off Nantucket, they referred to him as a “retired ship captain” and described him as “very conversant with Atlantic shipping.”

The late Ralph Look of Vineyard Haven recalled his childhood neighbor in a 1979 interview: “Down the road, there was a man where the trolley cars stopped, that end. St. Croix Oliver. See him now. Sold cigars, cigarettes. Provisions. A little salty — there was some [liquor] soliciting there. Sailors used to come in and buy, same as Dr. Lane, you know?”

Oliver also served as a notary public, and became the legal guardian of siblings Augustus, Larry, and Nellie Crowell, after both their parents died from typhoid fever.

Lithuanian immigrant Sam Cronig, later known for his own namesake grocery, reportedly worked in Captain Oliver’s store as a teenager.

Captain Oliver finally retired in 1907 at the age of 74, and the store was purchased by the grocery firm of Bodfish & Call, a business which later merged with others to form S.B.S. About 1921, the building was purchased by the Seamen’s Bethel next door and moved to make room for their gardens. Its present location and condition are unknown. 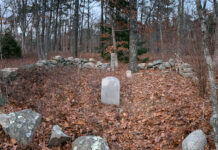 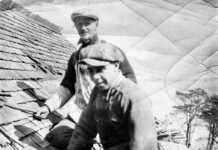 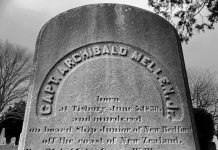