Martin S. Fox of New Jersey and Chilmark passed away on April 8 at age 95 from complications of a COVID-19 infection. Martin was a summer Vineyard resident who was well known among the fishing community. He won first place for shore-caught false albacore in the MV Striped Bass & Bluefish Derby in 1991, and earned second place twice for shore-caught bonito. From 1980, when he first bought his Chilmark home, up until his early 90s, Martin could often be found at his favorite fishing spot — the Menemsha jetty. 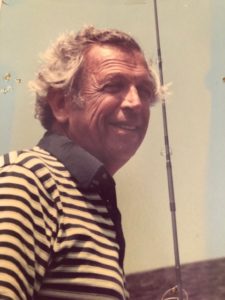 Martin was born in Newark, New Jersey, the eldest of four sons of Jacob and Mae Bonda Fox. He attended Weequahic High School and went on to receive his BA from Amherst College and his JD from Harvard Law School. Martin served as a lieutenant in the U.S. Air Force during World War II, working as a meteorologist. He later joined his father’s law firm in Newark, which became Fox and Fox. He happily retired at age 66 so that he could spend more time fishing.

Martin was a passionate supporter of civil rights and social justice. He served as vice president of the Essex County Chapter of Americans for Democratic Action and  ran as the Democratic nominee for the U.S. House of Representatives in 1952 and 1954. Though he narrowly lost both times (“rain on election day was bad news for Democrats”, he would say), recognition of his ideas and positions led to his appointment to the New Jersey State Board of Education in 1960 by Governor Richard J Hughes and in 1970 by Governor William Cahill.

During the “Long Hot Summer” of 1963, Martin traveled to St. Augustine, Florida to provide pro bono legal services for civil rights activists led by Dr. Robert B. Hayling, a local dentist in whose office Martin slept while he helped peaceful resisters, including Dr. Martin Luther King, Jr., get out of jail.  Some of the worst brutality against defenders of civil rights occurred in St. Augustine, and the trip was considered so dangerous that his family in New Jersey did not know where he was sent. His strong political and civil rights commitments never faded.

Martin was an active member of the Jewish community. He was the President of the Jewish Community of Metropolitan New Jersey from 1972-’74 and continued to play a role in its charitable work until he became ill this month. In 1979, Martin was elected president of the Jewish Telegraphic Agency. He served as a United Jewish Appeal campaign chairman and was also a board member of the Council of Jewish Federations, the Hebrew Immigrant Aid Society as well as the New Jersey Historical Society.  When Governor Brendan Byrne and his wife, Jean, were invited to visit Israel in 1978 as guests of the Israeli government, Muriel and Martin Fox accompanied them.

Martin would have turned 96 in under two months. Whenever anyone complained to him about getting old, he would say, “it’s better than the alternative.” He had a good run.