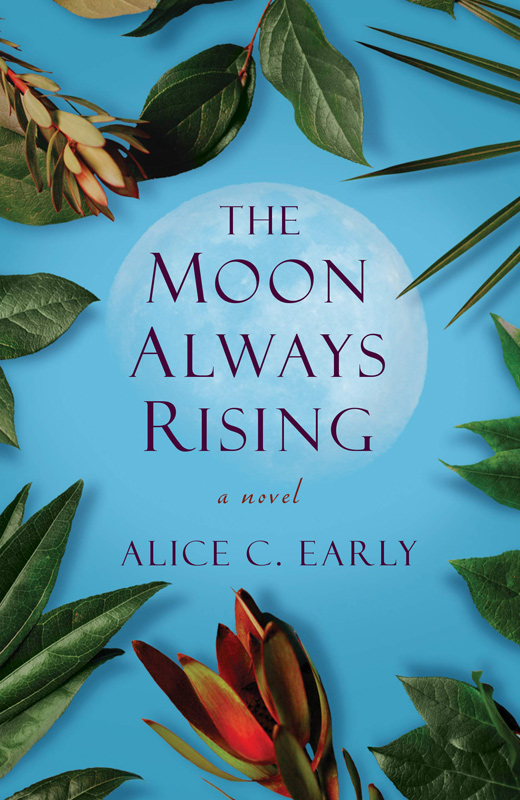 The little island of Nevis in the Caribbean sounds like an oasis right now, a place of refuge. But it is a complex kind of refuge for Alice Early’s heroine Eleanor “Els” Gordon as we discover in her intriguing novel “The Moon Always Rising.”

Early is a consummate writer who so stunningly draws us into the very texture of her story that we can feel the humid tropical air and interior lives of her characters. The three leading protagonists are feisty individuals. Leading the trio is Els, who for sorrowful reasons trades in her high-powered world of investment banking to take harbor in a dilapidated plantation house. She comes to the island with a whole lot of baggage — the tragic loss not only of her professional identity but also her childhood soulmate, the family’s Scottish Highland estate after her father’s death, and the loneliness of having a mother who abandoned her as a young child.

Although seeking a self-imposed exile, Els’ antique house comes with the robust ghost — or “jumbie” — of its former owner, Jack, whose comings, goings, and intuitive knowings injects a touch of magical realism to the novel. Els pieces together much about his less-than-saintly and rather overly amorous life from the various personal possessions still left around. The nature of their conversations is tempestuous, with Jack and Els sparring with pointed insights into each other’s weaknesses. Eventually, they turn into unlikely allies in each other’s healing. Jack persuades Els to make major amends to two of his former lovers whose lives he marked, and marked him, in order to help set him free. Jack and Els’ relationship is richly layered as they navigate forward. Early describes Els pondering: “Time and again, she’d found herself ruminating about the exile she and Jack had chosen, both of them blustering through life, both nursing corrosive anger and guilt. The salve he found in the embrace of women. Her retreat into the embrace of memory.”

Els doesn’t so much live in Jack’s home but rather as she states, “Sometimes I feel as if I’ve moved into his life as well as his house.” Jason, a tell-it-like-it-is local, confronts her: “’You tired a’ you own life . . . so you tink you can just appropriate his, like buyin’ a new dress?” And Els responds, “I think I’ve made this house a marriage. An overlay of my life and belongings of his.”

Appearing and disappearing at whim, Jack plays a cheeky “cupid” pushing Els to break through the bonds of mourning she carries for her deceased fiancée to make space for a real-life relationship with an equally complicated yet immensely appealing character, Liz. This handsome charter boat captain himself carries serious scars from the dramatic loss of his wife. He comes and goes, ostensibly for work, but which also gives him the ability to “legitimately” disappear for chunks of time with his high-powered clients roaming the seas and islands. However, whenever Liz and Els get together, the sparks fly and not always with romantic results. For her part, Els repeatedly pushes him away whenever he comes close to invading her fast-held emotions, stubbornly holding on to the past. Referring to her dead lover, Els says, “I’m furious with him for dying. For leaving me . . . Since he died, I’ve no place for all that love to go.”

Early just as vividly fleshes out her “minor” cast of characters who reflect a swathe of the fascinating social, political, and racial divides of which tourists aren’t typically aware. Early says, “Given my experience of living on Martha’s Vineyard, an Island that is a tourist destination, I wanted to explore the dynamics of visitors who believe they understand a place just because they have fallen in love with it during a brief vacation, and may even choose to move there based on those impressions.”

Quickly going broke after acquiring the plantation home, Els has to figure out how to make money to survive, which forces her to open up to and eventually rely on those around her — although not without lots of bumps along the way. She is a hard-edged, combative character who takes time to warm up to. “A wise writing teacher drilled into me that a character doesn’t have to be likeable, but she has to be believable,” Early says. “My intention with Els was to create a wounded character who pushes the love she craves away, then believably struggles to let love back in.” Very slowly and at times reluctantly, Els builds a place for herself in the community and gathers an ad hoc quirky family of sorts.

Early adds yet more complexity by bringing Els’ flamboyant Italian mentally fragile mother carrying her own secrets into the picture. Els invites her for a visit in hopes of getting answers for her mother’s abandonment, which leads to a poignant, painful revelation.

A year-round Vineyarder since 1999, Early says the Caribbean island of Nevis is dear to her, and she has been journeying there annually since 1996. Yet, despite the specifics of the locale, the heart of the book and its major players is about forgiveness to escape the bonds of their past lives. She says, “I would like readers to be entertained but also challenged to think about the notion of starting over. I’m a great believer in second chances, and I love a good redemption tale. Most of the main characters in ‘The Moon Always Rising’ are stuck in a place from which only forgiveness (of others, of themselves) can release them.”

We are fortunate that Early’s rich tapestry of both characters and narrative creates a much-needed refuge during these challenging times.