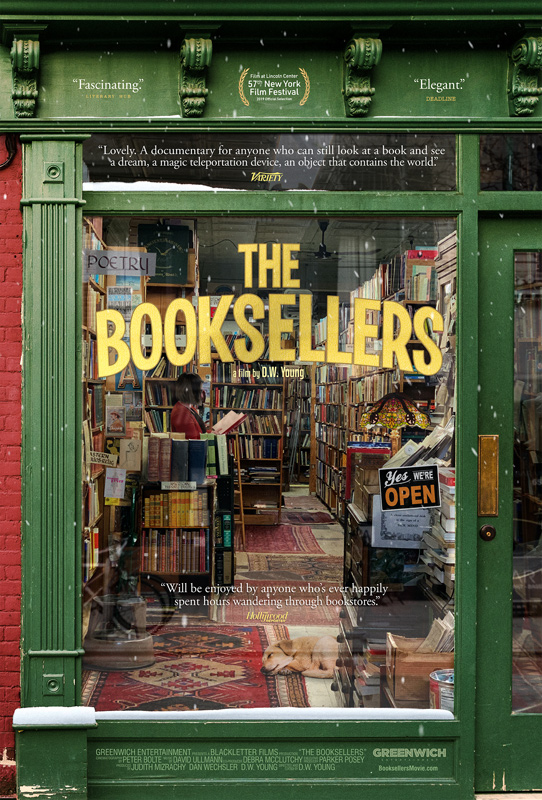 There’s a certain irony in the fact that the best way to highlight the world of booksellers specializing in antiquarian volumes is in a documentary film, not a book or some other print form. But “The Booksellers,” D. W. Young’s cinematic tribute to this specialized subject, covers it with charm and insight. The documentary is playing online at M.V. Film Center at Home.

The film begins at New York’s annual Antiquarian Book Fair and with A. S. W. Rosenbach, considered the most important member of this rarified profession. In the 1950s, New York, the epicenter of literary culture, had 368 bookstores, almost 50 of them on Fourth Avenue. Now owing to the Internet, there are only 79. Even though those still have a panache unlike chain stores like Barnes & Noble.

Computers and the Internet have meant that the hunt for rare books has been taken over by Google, becoming simply a way to buy quickly and easily what you want, not necessarily what you cherish. In earlier days, if a customer wanted a rare first edition, he could seek out a bookstore owner, a bibliophile or a buyer of books as sacred objects. Book scouts who would search for and discover a rare volume are a vanishing breed. There have been more changes in the field in the last 15 years than the last 150.

Book culture dates back to the 1400s with the Gutenberg Bible, thought to be the first printed book, and the first auctions held in the 1600s. As the culture has declined, books as objects have become more important. Fewer people may be reading books, but they have become artifacts of beauty. As physical objects, the typeface, the binding, and the size matter. An example is how dust jackets, valued in the 50s and 60s but then ignored, came back in fashion. The price for a copy of “The Great Gatsby” without a dust jacket has been $5,000, but $15,000 with even a tattered dust jacket. At the Antiquarian Book Fair, “Casino Royale,” the novel that the first James Bond movie was based on, sold for $150,000. If not at quite the same scale, the vintage book market compares to the art market. Bill Gates bought Leonardo da Vinci’s Codex Hammer, his collection of scientific writings, for $28 million.

One positive change has been the advent and acceptance of women dealers. Helen Kahn, head of the Antiquarian Booksellers Association of Canada, and Kit Currie, who wrote “Life as an Antiquarian Bookseller,” were not recognized. The Argosy Book Store, founded in 1925 by Louis Cohen, is now run by his three daughters, Judith, Naomi, and Adina. Because they own the East 59th Street building the store is in, it is safe. Leona Rostenberg and Madeleine B. Stern were denied membership in the Grolier Club, an organization for bibliophiles dating back to 1884. Yet they went on to discover “Little Women” author Louis May Alcott’s pseudonym, Flora Fairfield, for her pulp novels.

Part of the pleasure of “The Booksellers” comes from interviews with the interesting individuals who make up the cadre of the field. Karl Lagerfeld has a warehouse with 300,000 books. Another collects hip-hop memorabilia. There are interviews with New York author and commentator Fran Lebowitz, actress Parker Posey, and journalist Gay Talese.

“The Booksellers” is available online at the M.V. Film Center.