Marjorie Joan (Nicholson) Masse, 86, passed away peacefully on April 15th, 2020 in Billerica, MA. She was the loving wife of Robert H Masse of Lowell, MA. They shared 33 years of marriage together. 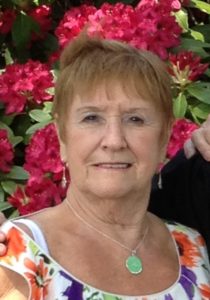 Marjorie was born in Bradford Yorkshire, England, on April 24, 1933. She was the daughter of Nellie (Ormerod) and Robert (Hoggan) Nicholson. Marjorie grew up in Bradford with her brother Keith during World War II. Her father Robert served in WWII and worked in the ironworks. Her mother Nellie worked in the local textile mill.

Marjorie came to the United States on April 5, 1959 at the age of 26 to become a nanny for a wonderful family, the Crocketts, in Weston. She quickly became an adoring part of their family.

Soon after her arrival to the US, Marjorie married Walter Macomber in 1960. They had four daughters together Robin, Stacey, Lori and Tina and raised their family in Chelmsford. Marji was a stay at home Mom and a motherly figure to all the children in the neighborhood; no one could resist her homemade cooking. She worked a variety of jobs but ultimately became a health aide for many years.

In 1980 Marji moved to Nashua, NH, where she met her love Robert Masse; they were married on April 25, 1987; she could not resist his charm, kind heart and swift sense of humor. She became a stepmom to Bob’s six grown children: Bob, Lisa, Debbie, Susan, David and Keith.

Falling in love with Martha’s Vineyard, Marji and Bob moved to Edgartown in 1989. For 12 years they enjoyed hosting many visits from their family and friends; creating lasting memories. To most islanders she was known as “Mummy.”  If you ever had the pleasure of meeting her, you were definitely blessed with anything from childhood stories to her current least favorite celebrity. Marji loved the water and enjoyed swimming in her pool, where they often entertained. She was an avid dog lover and treasured her time with Bud, Ziggy and Manti. Inspired by her daughter/artist Stacey, Marji took up painting and it quickly became a passion of hers, especially landscapes of places she had visited.

Spending many winters in Florida, Marji and Bob moved to Tarpon Springs, FL in 2001. They enjoyed the warmer weather, but soon missed their families. They moved back to New England and settled in Billerica, MA. Marji & Bob often went back to the Vineyard to spend time with family and friends.

Mummy, you will forever be in our hearts and we will cherish our loving memories with you always.

A service and celebration of life will be held at a future date. In Loving Memory of Marjorie, the family ask that you make a donation to help fund the research in finding a cure for Alzheimer & Dementia Disease; www.alz.org.