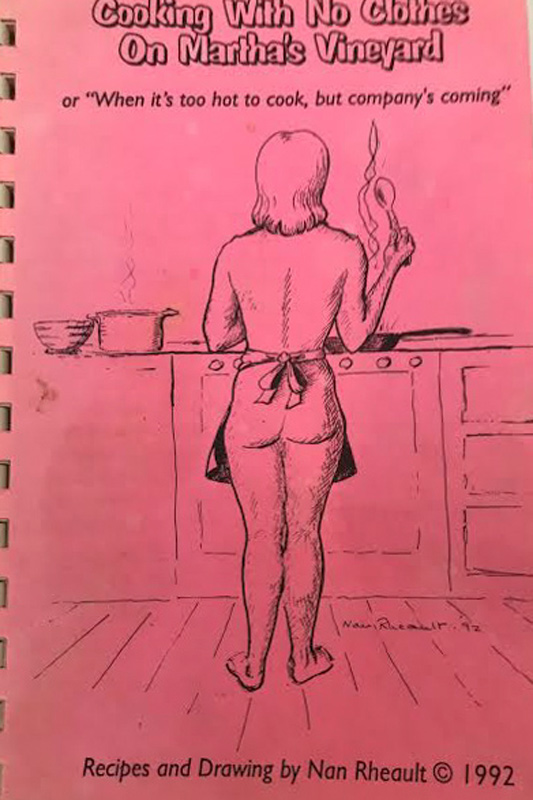 When Nan Rheault, originally of Connecticut, then of the world, and finally of Oak Bluffs, befriended you, you stayed befriended. It was as magical as if, in an earlier time, King Arthur gave you a whack at Excalibur.

For me, this came about when my then-boyfriend, Marty Nadler, of Hollywood (we met when my agent sent me to pitch “Laverne & Shirley” ideas to him at Paramount Studios) brought me to Martha’s Vineyard on a date.

This was in the spring of 1976 after he first discovered the Island in 1966. That was when his college theater troupe at Ithaca College performed in Oak Bluffs in the summer, turning the school gym into a fair rendition of an off-Broadway show hall. Nan had taken the players under her wing, and I was escorted to meet her forthwith at her home on the eastern side of the Lagoon.

When I wrote “forthwith,” I realized I was like some new recruit in the Italian mob presented to Vito Corleone.

She was attractive, tall, slim, with a helmet of short blond hair, and she’d been married to Col. Robert B. Rheault, commander of the Green Berets. Together they spent many years in places such as Paris, Okinawa, and Germany, where their oldest child, Susanne, was born. Two more kids appeared in the dynastic line, Michelle and Robert Jr., the latter nicknamed Skid (get it? Skid Rheault), and over time the family had 17 homes in 22 years.

But back to the Nadlers. By 1977 Marty and I were engaged and Nan instantly offered her waterfront house for our wedding reception. In June of 1978 we exchanged our vows on Seth’s Pond, a ceremony at which Nan was a notable guest. Later that evening we enjoyed an extensive bash at the Rheault home.

This amazing lady did it all — led bicycle tours in the Dordogne of France, plus she scuba-dived and breathed life into environmental causes such as the protection of the Southern Woodlands. She took up figure skating at the age of 50, and pursued it with a passion that caused the M.V. Ice Arena to spring up thanks to her efforts.

She also gardened, but not in any old way, more in a Agricultural Fair blue-ribbon-prizes sort of way. She painted and sold more than 100 pastel portraits, mostly of children, in addition to seascapes and landscapes of the Vineyard. Also, with Jack Mayhew she recorded “Season of Sounds of Martha’s Vineyard,” with bell buoy clangs and squawks of seagulls. (Gosh, I wonder where I put my original CD . . . ?)

Another passion was culinary arts, which went hand-in-hand with a major amount of entertaining around her dining table, which seated 12 easily. As the story goes, on a sweltering afternoon in late August, 1991, she popped round to her daughter Susie’s cottage next door, to find the young beauty with a wooden spoon in her hand, an apron tied around her waist, and otherwise stark naked.

Susie explained she had company coming, but it was too hot to cook in anything but her native Rheault skin. Nan understood. The whole family was fond of skinny dipping. Oftentimes you’d be standing on Nan’s porch in the late afternoon and on the nextdoor beach you’d glimpse the slim nude figures of Susie and her husband, and sometimes a sibling or two, entering the grey-blue waters of the Lagoon.

When she came upon her bare-skinned daughter under an apron, Nan had one of those creative epiphanies for which she was fabled: How about a book? “Cooking With No Clothes on Martha’s Vineyard,” illustrated by herself, with recipes rife with chilly ingredients. The cover would feature a rear-view drawing of cute Susie as she stands before the stove, bare buttocks exposed beneath her apron.

I’ll share with you the Nan recipe I remember best from first-hand experience, but let me finish up, with random snapshots, this fond recollection of an adventurous woman:

Marty remembers 60s weekends when her Green Beret husband was stateside for visits and he’d gather his wife and kids and their chums for a climb up the water tower.

Nan once appeared at our home on the beach of East Chop and suggested a swim from the dock to the left of us — it belonged to Brad and Betty Smith — to the dock on the right — part of the Bell estate, with a big house rising up the hill behind us.

I, not having the physical aplomb of this red-hot military mama, said with a gulp, “That looks like a long haul, Nan.”

I put on a swimsuit and followed the plucky lady to the lengthy Smith wharf. We dove in. Swam a long bit. Then as we reached the Bell dock, Nan grinned and said to follow her back to the Smith’s piece of maritime real estate. I waved at her to go her own way while I, gasping for breath, splashed to shore.

She was always evasive about her age and, in the same way, she told no one outside of her family that she was battling cancer, diagnosed in the summer of 2006. Only a few months before, she bought herself a new bike and continued to pedal down Barnes Road, then over to the bike path on County Road to pick up the mail and engage in lively conversation with friends and neighbors.

My last memory of her was her appearance at my store, Sun Porch Books in Oak Bluffs. Nan got to talking with a summer gal who, like Nan, owned a country house in France — yes! just another feather in our lady’s cap! This woman also shared with us her present struggle with cancer and, as they parted, Nan called after her “Bon courage!”

At her memorial at the West Tisbury Congregational Church, we told sweet stories and fun stories, and I believe Nan would have been the first to guffaw at them. So here’s a nod to a recipe from her lovely nudie-cutie book and, may I say, in the midst of this hide-in-your-home time we’re all going through, I can’t think of a calmer, safer opportunity to cook au naturel.

Cool as a Cucumber Mousse

It is low-calorie, yet tastes rich. Serves 6 to 8

Dissolve the gelatin in the lemon juice and stock over low heat, stirring.

Put all other ingredients into the food processor — run the motor until everything is chopped up (but not too long — a little texture is desirable).

Add the hot gelatin mixture in the last seconds of processing. Pour into a mold and chill until jelled.