Susan L. Rogers passed away peacefully in her home with  family on April 21, 2020 after fighting a four-year battle with cancer. Susan was born in Stoneham on May 10, 1949. 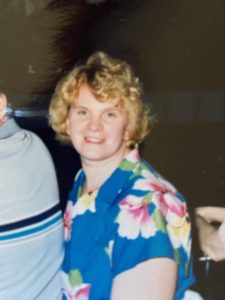 She grew up in Arlington and spent summers on the Vineyard with her family in a campground cottage. She loved the Island.

Susan graduated from Arlington High School, and continued her education at Newton Wellesley Hospital School of Nursing and graduated as a Registered Nurse, (R.N.) which she continued to be for her lifetime.

Susan worked as an emergency room nurse in Waltham Hospital until she permanently moved to Martha’s Vineyard.

She worked at the MV Hospital in the ER and a lot of other departments where she met many great people who still remember her today.

In 1975,  Susan married her beloved Husband Jerome E “Jerry” Rogers on August 2. It was 107 degrees in the church that evening and the candles were even melting from the heat. She always said that day “She and Jerry not only married, but melted together.”

Susan retired from nursing around 1979, but returned to work part time at Windermere and a few other times here and there. She loved being a nurse and mostly loved the patient care part of the profession.

She was always kind, compassionate, caring and always put others before herself. She definitely touched the heart of anyone who has ever met her, whether it was only for a few moments, as a longtime friend or being a family member. Susan loved her family.

She loved to knit, but not for herself. She knitted more than 100 bears for The Mother Bear Project and would pack boxes full of them to send and be distributed to children in other countries who had lost their parents and had nothing else except for those bears. She would knit prayer shawls before she ever even knew she had cancer, and gave them to anyone she knew had cancer to wrap up in. She also knitted wool hats and slippers for the soldiers in the cold mountains in Afghanistan to keep them warm. She would make mittens for many years for mitten trees and for any other things she could find to help.

Susan always gave so much and never expected anything in return. She was a truly amazing person.

Susan was predeceased by her parents, Charles and Virginia Skerry. She is survived by her loving husband of almost 45 years Jerome  E. Rogers; her son, Andrew N. Rogers (Wendy) of Manchester CT, her daughter Julie A. Gales ( Richard) of Belmont NH, and her daughter Amy E. Smith (William) of Oak Bluffs. Her grandchildren, Jasmine M. Devine Sherman (Andrew) of Oak Bluffs, Nolan and Christopher Rogers of Manchester, CT, and Kayleigh D. Gales of Belmont, NH. She is also survived by her sister Cynthia Dauphinais of Oak Bluffs. Many, many sisters and brothers in law, nieces and nephews, and loving and caring friends, old and new and so many people whose lives she touched in so many ways.

A memorial service will be held at a later date which will be announced in a later edition of this paper. In lieu of flowers , please send donations to Hospice of Martha’s Vineyard, PO Box 1748, Vineyard Haven, MA 02568.
Arrangements are under the care of the Chapman, Cole and Gleason Funeral Home, Oak Bluffs. Please visit www.ccgfuneralhome.com to leave a message of condolence.