Stephen Greeley Wilkerson of Hanover, NH, and Oak Bluffs died peacefully at home in Hanover on Friday, April 24, 2020. He was born March 29, 1941 to Oscar A. and Marian Perkins Wilkerson. Steve grew up in Colonia, NJ, attended the Pingry School, and graduated from Middlebury College in 1963 with a bachelors in Geography. While in high school he met his future wife, Katherine Hodgkinson. They married in 1967 and raised 3 children while living in Englewood and Chatham, NJ. 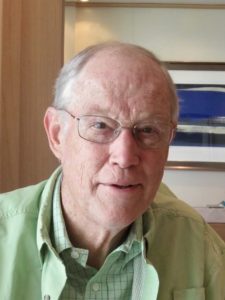 After graduating from Middlebury, Steve joined the Army where he was in the Counter Intelligence Corps. Following an honorable discharge, he began working for Nabisco in 1966 where he would spend the next 35 years. Steve excelled professionally at Nabisco, moving between leadership positions in strategic planning, marketing, and sales. Steve retired in 2000, and he and Kathy moved to Hanover, NH in 2013.

Wherever Steve lived, he was actively involved and committed to his community. Over the years he served as the treasurer of the Englewood Field Club, was an active member of the Englewood Presbyterian Church and the Church of Christ at Dartmouth College, President of the East Chop Tennis Club, President of his Hanover condo association, and volunteered with Upper Valley SCORE and the Montshire Museum.

Steve is remembered fondly for his humor, ingenuity, and thoughtfulness. Throughout his life he cultivated a close-knit yet ever expanding network of friends. No road trip was too long or detour too far if it meant visiting friends and family. When it came to humor, Steve was in a league of his own. The more creative and unexpected he could be, the better. Many friendships were built on the understanding that if Steve was in the house, there was good natured mischief in the works.

A master of logistics, Steve put these skills to good use every chance he got. During summer trips to Martha’s Vineyard he somehow managed to stack a Sunfish sailboat, a luggage pod and 5 bikes atop the red Volvo wagon for the fast-paced drive to the ferry. His family was dubious but he was confident — and usually successful. Many of these vacations were spent with close friends and extended family, creating lasting memories and nurturing the close connections Steve loved.

Arrangements are under the direction of the Rand-Wilson Funeral Home of Hanover, NH.