One possible good outcome of the pandemic and its impact on the economy is having the cleanest air and water in decades, thanks to the reduction in vehicle traffic. Unfortunately, this transformation will not last once the virus has passed. Climate change remains the severest long-term problem facing the world today.

Just after the 2016 presidential election, I wrote in these pages that Donald Trump has “consistently expressed his belief that climate change and global warming were a hoax.” As for the Environmental Protection Agency (EPA), “‘We are going to get rid of it in every form’” (MV Times, Jan. 4, 2017). Thanks to the New York Times, we now have a list of almost 100 eliminated or reduced environmental rules or regulations by the EPA or presidential executive order. Some of these rules originated in the Nixon administration.

This has happened because in part President Trump harbors a well-known skepticism of science. He has claimed that he possesses innate scientific knowledge because of his relation to his uncle, John Trump, an MIT physicist and electrical engineer. He told the Centers for Disease Control physicians and researchers in March that his scientific learning was due to his “natural ability.”

But he has long downplayed scientific expertise, and early on, even questioned the efficacy of vaccines, though now he promotes one to protect against COVID-19. He has promoted a drug to combat COVID-19 that has shown little effectiveness, and he has even suggested that it might be wise for doctors to inject sick people with disinfectant (no, don’t do it).

The automobile, fossil fuel, and other industries have argued that many of the environmental rules were onerous, and one of the first presidential goals in 2017 was to attack them. According to the New York Times, the effort has met with great success.

Let us review just a very few of them (the full list may be found at bit.ly/TrumpEPArollback). Just last month, automobile efficiency and greenhouse gas standards were weakened, even though gasoline usage and its accompanying increase in pollution are expected to drastically increase. The EPA recently relaxed rules governing the leakage reduction in substances known as super-polluters, which are hydrofluorocarbons, refrigerants that have been shown to damage the ozone layer.

An executive order rescinded an Obama-era requirement to reduce federal agencies’ greenhouse emissions by 40 percent within 10 years. Last year, President Obama’s national clean power plan was replaced by one left to the states to create and enforce. Or not. The Obama plan limited the carbon emissions on fossil fuel plants, including those fired by coal and gas. In 2018, the EPA lifted controls on toxic air pollution that had been in place since the Clinton administration. In other words, polluters need to reach much lower standards.

The administration opened the Arctic National Wildlife Refuge for oil drilling. It did away with water standards regarding the ocean and coastal waterways, as well as the Great Lakes. Instead, the policy favors energy production by the fossil fuel industry.

And it is now well known that the U.S. gave notice that it would withdraw from the Paris Climate Agreement, an action that will take place in November.

As I noted in that earlier essay, “Emission standards on cars and trucks and energy-efficient refrigerators and washing machines may all go down the drain. Residents and visitors may face severe coastal erosion when increasingly intense ferocious storms throughout the year hit the Island. Summers may grow hotter and winters colder, or, alternatively, we could see warmer-than-normal winters and cooler summers. The accompanying decline in both agricultural production and the fishing industry, and higher energy use, will directly affect the Vineyard.”

After all, for the new administration, climate change was always a Chinese hoax that the American people blindly accepted. But if success could be measured by failure, the Trump administration has succeeded at our expense. We are the ones who will suffer. The new environmental policies have failed us, the American people, as we can anticipate growing pollution and an increase in illness and death due to the dire ramifications of climate change. This is a sad commentary on our time as we live through this dreadful, disease-ravaged moment.

How lucky are we? 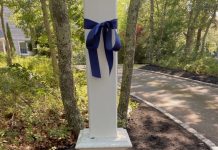 Honor his memory by voting

Make it a day to remember