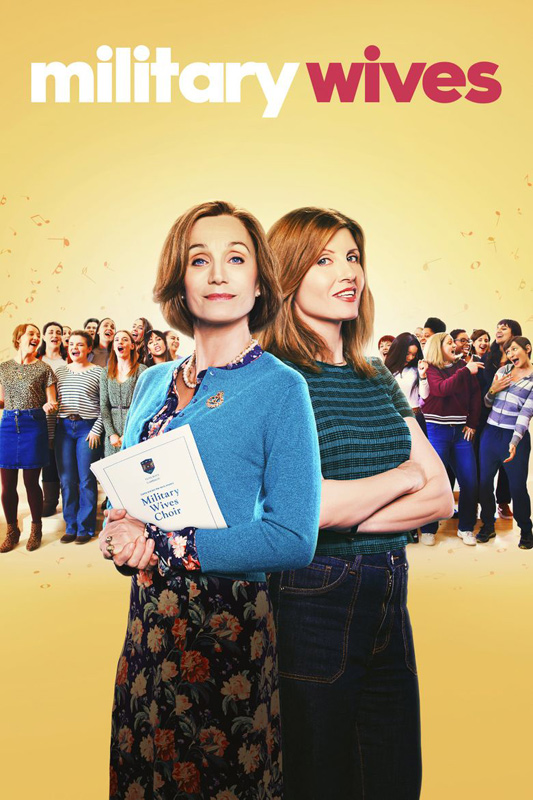 ln order to keep the wives’ minds off their husband’s deployment, Kate proposes a number of activities, ranging from book clubs and film series to monthly formal dinners and knitting. What happens is the formation of a choir. Kate and Lisa have very different ideas about what music the group should sing, and the friction between them drives the plot. One wife wisecracks, “This reminds me of when my parents got divorced.” Once Lisa asserts herself, the group comes together. She unpacks her keyboard to accompany the singers.

Subplots include the sometimes contentious relationship between Lisa and her daughter Frankie (India Ria Amarteifio), and Kate’s loss of her son in a past battle. It’s not really a spoiler to mention that newlywed Sarah (Amy James-Kelly) loses her husband in battle, because of its impact on what these women are going through. The funeral and burial are moving and include a beautiful rendition of “Ave Maria” by Jess (Gaby French).

A number of scenes illustrate the stress these wives undergo. In one, a woman’s video conversation with her husband freezes and then is lost. Kate’s husband is wounded and returns home. Walking down the street together, the group passes a man handing out antiwar flyers and lets him know they are the wives of men fighting in Afghanistan. When the women sing together at a bar, Kate walks out because the song brings back bad memories. Kate watches TV commercials and binge-buys products; the women imbibe a lot of wine and beer.

Impressed with the chorus’s songs, the base’s brigadier arranges an invitation for them to perform at London’s Festival of Remembrance, honoring British soldiers who have died. After a number of stops and starts, the women practice in earnest. One informal performance at a bar goes poorly when street noises like a truck backing up compete with their singing.

“Military Wives” is inspired by the story of the first British military wives’ choir, formed in 2011. That group led to the BBC TV series, “The Choir,” and a hit single, “Wherever You Are” (2011), that topped the charts in Great Britain. Seventy-five similar choruses now exist, ranging from the Falkland Islands to Cyprus, and involving more than 2,300 women.