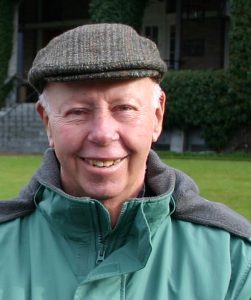 Jack was born on August 4, 1932, in Willimantic, Conn., to Edna Vanderman Hargreaves and John Albert Hargreaves. Jack graduated in 1950 from Willimantic High School, where he played on the football team and was inducted into the Boy Scouts of America’s prestigious Order of the Arrow.

Jack graduated from Amherst College in 1954, and was active in alumni activities, especially with the Amherst Association on Martha’s Vineyard. He earned an MBA from the University of Hartford in 1968 while raising a family and holding down a full-time job.

After his graduation from Amherst, Jack joined the Army and served from 1954 to 1956. (Two days before he died, he could still recite his serial number.) Jack was posted to Germany, but his departure was delayed by the illness of his father. By the time he arrived in Germany, his unit had already deployed, and it was too late to rejoin.

Jack reported to the local personnel office for assignment, and quickly recognized the officer, who had caddied at the same country club in Connecticut where Jack had worked a summer job as a lifeguard. Wanting to help a buddy, the officer suggested an assignment in Munich, changing Jack’s life forever. Jack worked in the office of personnel, traveling to U.S. bases across Europe to administer personnel assessments. He took advantage of everything Munich had to offer, from attending classes at the University of Munich to hoisting an occasional beer at the Hofbrauhaus.

A co-worker introduced Jack to Ute Ziemer, a young German woman who worked for the Army as an interpreter. Ute, who had previously declined invitations by several American soldiers who invited her to bars, said yes to Jack when he invited her to an opera.

Jack and Ute’s courtship included frequent trips to the opera and ski outings in the Alps. By the time Jack was discharged from the Army in 1956, they were engaged. Jack returned to Connecticut after completing his military service, and his fiancée followed shortly. Jack and Ute were married on July 13, 1957, in Storrs, Conn., and remained married for 61 years, until Ute’s death in 2018.

After leaving the Army, Jack took a job with the Stanley Works, and remained with the company for 28 years. Through the Stanley Works, Jack, Ute, and their three children moved to Weatogue, Conn.; Scituate; Plainville, Conn.; Allentown, Pa.; São Paulo, Brazil, where Jack ran Stanley’s Brazilian subsidiary; Windsor, England, where Jack ran the company’s European and Middle East operations; and back to Connecticut.

Jack eventually left the Stanley Works and joined Walter Kidde, moving to Chapel Hill, N.C., and eventually returned with Ute to Brazil for two more years before retiring in 1993 to Sarasota, Fla.

Jack was a competitive and enthusiastic athlete throughout his life, playing football in high school and college and, in his adult life, enjoying squash, tennis, and golf. He served multiple terms as a town councilman in Plainville, Conn. including a term as council president, and volunteered for many years as treasurer of the East Chop Tennis Club on Martha’s Vineyard.

Jack was an accomplished handyman, and spent countless hours maintaining and restoring the beloved summer home he and Ute bought on Martha’s Vineyard in 1978. He particularly loved doing stonework, including building dry stone walls and laying flagstone. He eventually learned and was struck by the fact that a relative from his past had been a stonemason. He was an excellent cook, and enjoyed nothing so much as gathering his family for dinners at the Vineyard house.

An avid student of history, Jack read voraciously (in both English and German), and researched the genealogies of both his and Ute’s families. He took pride in the fact that his father immigrated at age 16 to the U.S. from Yorkshire, England, and that his mother could trace her roots in Connecticut to before 1860. Jack fondly recalled growing up at 3 Turner St. in Willimantic, in a house which still stands today. He also vividly remembered the 1938 New England Hurricane, one of the deadliest hurricanes ever to strike the region.

Between Jack’s extensive reading and his unfailing recall, he always had facts and details at his command. He used them to debate politics and to regale his family and friends with stories of historic figures and events. His friends laughed that they could rarely get a word in edgewise when Jack was holding forth.

Jack is the beloved father of son John, daughters Christine Hargreaves Ewing and Anne Hargreaves Corley; grandfather of Heather Ewing Lane, Celeste Ewing, and John Corley; and great-grandfather of Ava, Kyla, Ella, and Michael Lane. He was adored by his family, and will be sorely missed.

Memorial contributions may be made to Camp Jabberwocky, P.O. Box 1357, Vineyard Haven, MA 02568, or at campjabberwocky.org/giving.