However screwed up the world may be, certain things keep chugging reliably onward. Pandemic? Protests? Birds don’t care. Their focus is elsewhere, and their lives proceed in a totally predictable way.

Why is this moment so critical? Well, for one thing, each fledgling represents an enormous investment of time and energy. When a female bird loses an egg, that’s a setback; a lot of protein went into making that egg, and in order to replace it, the adult bird needs to eat a lot of insects. But insects abound in spring, and a female bird’s reproductive organs can often just crank out one more egg to replace the loss.

But by the time an egg has hatched, and the hatchling has left the nest, its parents have invested hundreds of hours in childcare. They’ve made hundreds of hunting excursions, bringing prey back to the nest to stuff into their voracious youngsters. If they lose their young at this stage and have to start again, they’ve lost that entire investment. And they’ve lost much of the breeding season; with every passing day, it grows more likely that their offspring won’t be self-sufficient by the time migration begins or cold weather sets in.

And so the process of fledging is a stressful one for all parties involved. Freshly out of the nest, thrust suddenly into a vast world full of threats and unfamiliar objects, the young bird itself is disoriented and frightened. And the adults are simply frantic with concern, torn between guarding against predators, bringing their youngsters food, and teaching their offspring vital survival skills. Time is short, threats are many, and mistakes or errors of judgment are fatal.

Fresh from the nest, young birds often call almost incessantly, giving notes that are different from adult call notes, though often suggestive of them. (As with preadolescent humans, their vocal apparatus isn’t fully developed.) Their incessant chatter has both advantages and risks. On the plus side, it makes it easy for their parents to keep track of the youngsters. And just as a crying human baby is impossible to ignore, a constantly begging baby bird is forever reminding its parents to feed me, feed me, feed me! But on the other hand, constant begging risks attracting predators. I expect each species has carefully nuanced instincts, with the young birds balancing safety with demands for attention.

The adults are often noisy at this stage, too, constantly giving alarm notes as they tend their young. Again, these vocalizations serve the social function of maintaining contact, at the risk of attracting unwanted attention from cats or crows. The adults’ vocalizations also divert a predator’s attention from the vulnerable young to the more mobile adults.

Despite the racket, nesting birds generally are amazingly good at concealing their operations, and odds are good that you have more breeding birds around you than you’re aware of. A species like the American robin, for example, nests nearly everywhere on the Vineyard; I doubt there are many yards that don’t have at least one pair.

At our yard in Oak Bluffs, we currently have European starling, common grackle, and black-capped chickadee young at large. An American robin pair, having lost their first clutch of eggs, is well on with incubating a second batch, and I expect their young will be out of the nest before too long. I’ve also seen downy woodpecker young in the neighborhood. Catbird and oriole chicks will soon be out of their nests.

It can be amazingly hard to actually find a young bird fresh out of a nest. But if you keep still and quiet and watch patiently, you may eventually spot an adult bird bringing a meal to its offspring, or urging it to start foraging on its own. Enjoy the experience of watching this behavior, but do the birds a favor and give them some distance. The ideal distance to watch any bird behavior from is one that allows them to feel comfortable ignoring you; if the adult birds are focused on you instead of on their baby, you’re too close.

Generally, it’s best not to intervene in the process of wild birds raising their young. A baby bird that appears unattended probably isn’t — adults have every incentive to keep track of their young, which represent such an investment of effort. And if a baby bird truly is unattended, it is unlikely that your intervention will help it survive. It’s a difficult truth to accept, but most fledglings succumb to predation, disease, or starvation.

But in a healthy population, enough do survive to replace their parents. And that’s the point of all the activity: perpetuation of the species. In a few weeks, the lucky few fledglings will be mobile, independent, and skilled. Next year, some of them will be the adults embarking on the challenging process of reproduction. 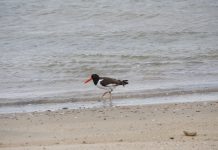 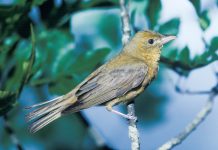