Edgartown resident Olga Church has an impressive list of accomplishments to her credit. After earning a doctorate in nursing from the University of Illinois, she helped establish the Midwest Nursing History Resource Center, then joined the faculty at the University of Connecticut, where she eventually served as chairman of the graduate nursing program. Church’s past humanitarian work includes directing an earthquake relief project for nurses and physicians in Armenia, volunteering for the World Health Organization in Geneva, and serving on the advisory board at the Yale School of Nursing Office of International Affairs.

You might think that after such an illustrious and varied career, Church would have earned a quiet retirement. But given her energy level and commitment to helping people, that was not likely to happen. When Church moved to the Vineyard full-time in 2002, she immediately took on a number of volunteer positions, giving her time variously to Friends of the Edgartown Library, the Edgartown Council on Aging (ECOA), the Federated Church Council, the Friends of Sengekontacket, and the Martha’s Vineyard Museum, where she has served as a docent for a number of years.

With all of that going on, Church has still found time to indulge in one of her enduring passions — painting. Although she had dabbled a bit throughout her life, Church only got serious about her artistic ambitions when she moved to the Island. “I took a few classes, but I never made the time for it,” she says. “When I retired, I promised myself that there would be no excuses. I had decided that what I really should do is devote some time to painting.”

Since first picking up a paintbrush a few years back, Church has shown remarkable talent for a newcomer, creating work in a variety of styles. A sampling of her work shows her proficiency in various media. A lovely little watercolor painting of a scene along Lake Michigan is executed in a loose style, with a few defining lines serving as focal points. Another watercolor captures the ocean, dunes, and sky with a skilled eye for color. A beautiful acrylic seascape, “Red Dawn,” based on a Vineyard Colors photograph, was part of Featherstone’s online show “Martha’s Vineyard: As We See It.”

Among Church’s nature images is one of a horseshoe crab and baby, titled “Mama.” The artist has even experimented with abstracts in an acrylic painting featuring vague cityscape outlines seen from different angles. One of Church’s favorite paintings is an expressionist-style blue nude that she did in the 1980s.

The novice artist has taken a few classes at the Featherstone Center for the Arts, and more recently, a class with ECOA director Meris Keating. She sees herself as still in the experimenting stage.

“I don’t have my own style. I do whatever I feel like doing,” says Church. “I haven’t set myself up to be identifiable. I think I’m still trying to figure it all out. I’m really just playing — trying them on for size. I wish I had gotten started sooner.”

Judging by her output and the quality of her work, it seems like Church is not only making up for lost time, but has found yet another outlet for her considerable and varied talents. “Some people play tennis,” she says. “I paint.” 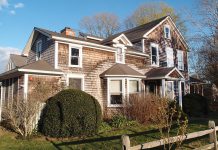