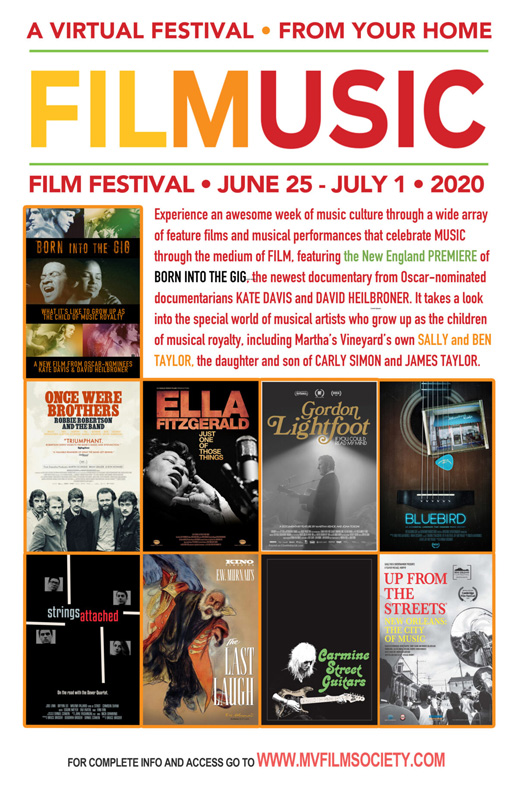 The M.V. Film Society starts streaming its Filmusic Festival on Thursday, June 25, now in its eighth year. As an added bonus, Island musicians Siren Mayhew, Sean McMahon, Rob Lytle, Lucy Mayhew, Andy Herr, Ben Hughes, and others will perform online for the festival. Rental of the films at the festival is available through eventive.org, and viewers will need to create a new account there to log in. The extra step is definitely worth it. Here are reviews of four of the films, and information about the other five.

‘Born into the Gig’

“Born into the Gig,” the latest documentary by Oscar-nominated local filmmakers Kate Davis and David Heilbroner, interviews children of famous musicians. Viewers will especially enjoy hearing about Vineyarders Sally and Ben Taylor, children of James Taylor and Carly Simon. Both have become musicians in their own right. As siblings, they support each other, and it’s a pleasure to see them perform. “I’m such an amalgamation of their music,” Sally says of her parents. Ben has performed extensively in Europe and made numerous albums, including “Close Your Eyes” with Sally and Carly.

Born in Jamaica, Skip Marley is the grandson of Bob Marley, and he’s performed since he was a teenager. A multitalented musician, he plays piano, drums, guitar, and bass as well as singing. “I hear Bob coming out of him,” says his aunt.

These musicians talk about how they feel like failures despite how successful they are. Bill Wither’s daughter Kori Withers says in the film that her father defended music over her, and sometimes she has simply felt like his little daughter. “There’s no birthright to this,” she adds. “You do it because you like it or love it.” Chris Stills is the son of Stephen Stills of Crosby, Stills and Nash, and he talks about living with his grandparents in France. “It was the first time I could count on a family member,” he says. The challenge of “Born into the Gig” comes in the way this film jumps back and forth among its subjects. It can be a challenge to keep track of them.

‘Ella Fitzgerald: Just One of Those Things’

This documentary fills in the surprisingly rough edges of the celebrated singer’s life. Ella’s career began at age 16, when dancer Norma Miller heard her sing at the Apollo Theater’s Amateur Night. Ella says she wanted to dance, but when she saw the Edwards Sisters tap dance, she decided to sing instead. After her mother died when she was 13, Ella was homeless on the Harlem streets. When her stepfather abused her, she ran away and ended up in reform school. Drummer and band leader Chick Webb gave Ella her start, and became her mentor. Taking her to the Savoy Ballroom, he introduced her to swing and the popular music she became famous for. Her rendition of “A Tisket, A Tasket” launched her nationally, and she became known as the First Lady of Swing. Ella was also one of the best-known skat singers.

Ella’s renditions of Duke Ellington and Cole Porter led to a total of eight songbooks of popular music. Marilyn Monroe became a Fitzgerald fan, and helped launch her in Hollywood. Her many awards included 13 Grammys, the Presidential Medal of Freedom, and honorary doctorates from Yale and Harvard.

‘Once Were Brothers: Robbie Robertson and the Band’

Told from the perspective of lead guitarist and songwriter Robbie Robertson, the legendary Band comes alive. Starting with Robertson’s teen career in Toronto, this documentary describes how Robertson and Garth Hudson built their success. They opened for Ronnie Hawkins and the Hawks, joining the popular rockabilly band when it moved to Arkansas.

The film is enhanced by interviews from Eric Clapton, Taj Mahal, Bruce Springsteen, and Van Morrison. Robertson became best friends with drummer Levon Helm, and once Richard Manuel and Rick Danko joined Robertson and Hudson, the Band was formed. They toured widely, becoming the tight, close-knit musicians for which they were known.

In New York they joined Bob Dylan as backup, and stuck with him during his unpopular 1966 switch to electric guitar. The group moved into a pink house outside Woodstock, N.Y., with Dylan visiting frequently. Their 1968 debut album is called “Music from Big Pink,” which Clapton says changed his life.

Revered as the Band was, it began to fall apart after all the members except Robertson got hooked on alcohol and drugs. As Robertson says, “I just didn’t want to go on the road with a suitcase of heroin.” Martin Scorsese filmed them in “The Last Waltz,” the documentary of their last concert in 1976. With “The Last Waltz,” the group would renew itself and move on. “That was the idea,” says Robertson. “Everybody just forgot to come back.”

Perhaps the most enjoyable film of the series is “Carmine Street Guitars.” This documentary narrates the story of guitar maker Rick Kelly, whose West Village store in New York is still the go-to place for the best handmade guitars, and a gathering spot for musicians who want to try out and/or buy the instruments. Kelly’s apprentice, Cindy Hulej, adds her artistry as well as guitar making, and her wood-burning skills can be seen on many of the guitars.

Pleasurable riffs from many professional musicians include filmmaker Jim Jarmusch, who inspired the film, and they come in many different styles. Other well-known guitarists include Lou Reed collaborator Stewart Hurwood and Charlie Sexton of Bob Dylan’s band.

Kelly makes his guitars from wood gathered around the city, often from historic buildings. One of Kelly’s favorite finds is wood from McSorley’s, which he says is the oldest bar in New York City, dating back to 1854. His mother Dorothy answers the phone and does the bookkeeping, and in one funny cinematic touch, is repeatedly shown trying to straighten a photo on the wall as she dusts.

Kelly and the guitarists who visit discuss many different types of guitars, including the Fender Stratocaster. The kind of wood Kelly favors is rosewood. Another is old-growth white pine, but maple is not. Marc Ribot, who has collaborated with Tom Waits and Elvis Costello, talks about the hidden part of music. He calls music a collective effort. “It’s about having a community, the people, the places, the clubs.”

The other Filmusic films

Plenty more documentaries make the festival a streaming event not to miss. They include “Gordon Lightfoot: If You Could Read My Mind”; “Bluebird,” about Nashville’s famous cafe; “Strings Attached,” about African women singers; “Up from the Streets — New Orleans: The City of Music”; and the silent film, “F. W. Murnau’s ‘The Last Laugh,’” with a score by the Berklee College of Music. Filmusic films can be rented until July 1 through mvfilmsociety.com.