I’ve been thinking, and who hasn’t these days, about racism and how each of us can work deliberately and earnestly to change the fear, anger, hurt, and hate that’s happening right now into the love and understanding that’s needed to effect change. No small thing.
I reached out to Island clergy to get their thoughts on the matter, but rather than quote them here, as I usually would, I decided to focus on one small effort, one thing that any of us can do: Educate ourselves.

The Rev. Chip Seadale, rector of St. Andrew’s Episcopal Church in Edgartown, sent out an email last week to everyone associated with the Island Clergy Group, extending an invitation to begin meaningful dialogue about racism. The Episcopal Diocese of Massachusetts and the national Episcopal Church offers “Sacred Ground: A Film-based Dialogue Series on Race and Faith,” and Seadale, along with Grace Church rector the Rev. Stephen Harding, is bringing it to the Island.

“I know many of you may have congregation members and friends who may be asking, as many of mine are, What can we be doing now?” Seadale wrote. “Stephen Harding and I have been working on finding something we both feel fits our parishes, and have resolved to do something together, something we think is really, really good.”

The best part of their idea is that they are opening up the discussion to every person on the Island who is interested in participating in the series. Small discussion groups come together, watch some powerful films, and work through a specific syllabus, peeling away layer after layer of our beliefs, feelings, and understanding of history around racism to reveal what we can do to hasten the creation of what Dr. Martin Luther King Jr. called “the beloved community.”

“The curriculum has gone around the Episcopal Church for a couple of years now,” Seadale said when I called him last week. “With so many things going on, and from what I can sense is a kind of a turning point in the public’s grasp of this sprawling issue of racism, what might be interesting is learning why all this is happening.”

The series requires a commitment to uncover our own biases, our own part in this ugly aspect of our lives. I looked online to get some background information about the series, because I’m interested in taking it myself. The program includes 10 sessions, and Seadale anticipates it will run for three to four months. Through watching compelling documentary films and reading the accompanying materials, you’ll have jumping-off points for conversation in your small group.

There were many things that moved me as I read information on the website associated with the “Sacred Ground” series. The creator of the study guide that goes with the series, Katrina Browne, wrote about differences between white Northerners and white Southerners. Browne made a documentary, “Traces of the Trade: A Story of the Deep North,” which follows her and members of her family as they come to grips with their discovery that their Rhode Island ancestors were the largest slave-trading family in U.S. history. She writes about an incident that happened as she toured the country with her documentary: “The white South, of course, has much to atone for still, but I’ll never forget the white Southern woman who came up to me in tears after a screening, saying essentially, ‘We’ve had to bear this shame alone. We’ve needed you to own it, too.’”

This “Sacred Ground” series is designed for white folks. This time we’re not asking people of color what we can do to fix this, instead we look deeper inside ourselves and our own experiences to find out how we can make changes.

Grace Church rector the Rev. Stephen Harding put it this way: “We have to look at ourselves; we have to do our own work.”

“The smartest thing we can do right away is to learn and listen,” Seadale said. “This is a really well-designed course, where people can watch it on their own time, then groups of six to 10 people meet by Zoom. It’s open to everyone on the Island for those comfortable enough for a Christian slant, nothing outrageous. The Episcopal Church has been long aware of and ashamed of our participation in Civil War slavery. We’re hoping people are comfortable enough to move along with us. This may be a really good opportunity for them to learn, not just about racism and African Americans but about various people of color; it’s all in there. You get involved and you get to know the people in your group, and you get to trust them. This model has really worked for churches, this small group model.”

The church recommends groups made up of culturally diverse individuals, with varying socioeconomic and political perspectives. The website describes the emphasis of the series as “white work,” but says the curriculum is flexible, and will work “if the Spirit leads to the formation of interracial dialogue circles.” It tackles not only racism surrounding African Americans but also indigenous, Latino, and Asian Americans, and how their histories intersect with European American histories.

“George Floyd’s death exposed the ugliness of racism, and his death is bringing an understanding of racism that many may not have had before,” Harding said.

“We’re happy to get other churches up and running, or individuals,” Seadale said. “I’m tired of the iron getting hot and then cooling off.” 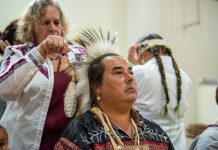 Have Faith: When hope feels far away