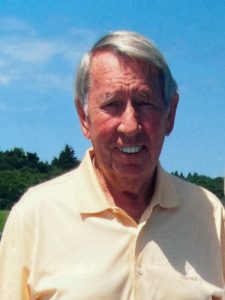 Born on Nov. 15, 1941, in Boston, Don was the son of Donald J. and Miriam Greene Hurley, who summered in Chilmark, beginning in the late 1940s. In 1954, the family built a home, Quitsa Mooring, on Nashaquitsa Pond. The property features a landmark flagpole which still flies the American flag when any of the Hurley family is in residence.

The year 1954 was significant for all Vineyarders, as Hurricane Carol pounded the Island and destroyed the Harris Creek Bridge, near the unfinished Hurley house. For several weeks, Don and his younger brother, Steve, provided ferry service in their rowboat to stranded up-Islanders until the Army Corps of Engineers could replace the bridge. During his early Vineyard summers, Don was a member of the Chilmark Little League baseball team, the Tigers, where he made friendships that lasted a lifetime, including with great pal Wesley Cottle of Chilmark. In his teens, Don spent several summers delivering milk for the Martha’s Vineyard Dairy, and working as a swordfish spotter out of Menemsha. In adulthood, he enjoyed playing golf at Farm Neck Golf Club, where he was a charter member.

Don was a graduate of Belmont Hill School and a member of the class of 1964 at Harvard College. Don served in the U.S. Coast Guard during the mid-1960s. He married Nancy Mae Burns on Oct. 15, 1966. After several years in Manhattan, where he was in Chemical Bank’s executive training program, they moved to Lloyd Harbor, Long Island, and lived there until Nancy Mae’s death in 2017. Don was a director of the British investment bank Kleinwort Benson. He retired as senior vice president and chief operating officer of the Institute for Applied Economics, a research organization.

In March, the family held a private, graveside service at the Chilmark Cemetery, where he was buried beside Nancy Mae and their two infant children. There will be memorial celebrations of Don’s life in Lloyd Harbor and Chilmark once social distancing restrictions are eased.

In lieu of flowers, gifts may be made in Don’s memory to Belmont Hill School, 350 Prospect Street, Belmont, MA 02478.