Betty Eddy, a longtime resident of Chilmark, died at her home on the Eddy Farm, Tuesday, June 30, at the age of 100 years and eight days. She passed on as she lived, surrounded by her family and animals. She loved Martha’s Vineyard as much as any place on Earth. 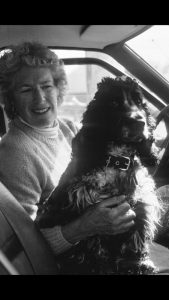 Betty was introduced to the Vineyard by her husband, Welles (“Bud”) Eddy, in 1958. She was unfamiliar with the Vineyard, and had never heard of Chilmark: “It was the end of the world! And I loved it!”

Betty (Elizabeth Austin King) was born in Brooklyn, N.Y., in 1920, and spent her childhood in New Jersey and New York City. Her love of sailing and all things watery grew out of summers in Bellport, NY. She vividly recalled the bright September day in 1938, watching in awe as the bay flattened and emptied out, hours before the Great Hurricane made landfall. She attended the Dalton School and Masters School before embarking on a life in Manhattan in the midst of World War II.

In 1945 she married Bud Eddy from Newington, Conn. After the war they moved to Kensington, Conn., where they lived for many years, raising their four children and an ever-growing number of dogs and cats, a crow, a pair of ducks, and Alice the alligator. Bet was a nurse’s aide at the New Britain General Hospital, eventually joining its board. At home she was an expert at sewing up hurt chickens. Her letters recounting these madcap years were collected in her 2012 book, “Letters from the Attic: Beloved Bedlam of Raising a Family in the 1950s.”

In 1994, Bet and Bud moved to the Vineyard year-round, and settled into their rambling cottage overlooking Chilmark Pond and the Atlantic. Bud died in 1995. Eight years later, Bet married her lifelong friend, Bill Lidgerwood, whom she’d known since 1939. Bill thought he could get Betty to spend winters off-Island, but she would have none of it. She persuaded Bill to move full-time to Chilmark, where he was soon hauling recycling to the dump in his pickup truck, picnicking in Menemsha, and adjusting to the Island rhythm. They enjoyed an active life together until Bill’s death in 2011.

Bet was intimately involved with the Women’s Symposium, an annual spring and fall gathering of more than 300 Island women. Her introductions and closing stories became legend.

She was a first-class raconteur, and an even better listener. She made everyone she met feel special, and wanted to know everything about them. Her sense of the ridiculous was contagious.

There are so many Betty Eddy stories and witticisms. Every trip to the old Chilmark dump was a treasure hunt. A visiting young friend calling to his mother who’d arrived to pick him up after an overnight: “Mom, Mom! You have to come inside this house! Everything is from the dump!” Sitting in her garden with one of her grandchildren, watching planes flying high in the sky, she commented she “wished someone would throw us down a ginger ale.” When confronted with a problem, her advice was often, “Let it lay where Jesus flung it!” Her default setting was social: “The ice can’t twinkle too soon!” She loved clamming in the island’s ponds, spending time with her dogs, and came to know every inch of the Eddy Farm.

She was a notoriously lax housekeeper, and considered cooking an inconvenience, but she was an excellent sailor, fisherman, gardener, and letter writer. She was, in her own words, “devoted to family, friends, animals, cream cheese, herring in sour cream, rare meat, butter pecan ice cream, and Dunkin’ Donuts.” As she got older, and her world shrank to her view of the sea, all she wanted was to be with her family, friends, her devoted animals, her evening gin, and “the latest news.” As one neighbor wrote, “She struck all of us as a presence from another time, not out of touch by any means, but worldly in the way people who grew up the first half of the 20th century can be.”

Donations can be made to Hospice of Martha’s Vineyard at hospiceofmv.org.

There will be a private graveside service.

“I look back and say, Elizabeth, how could you have been so smart to move here? How can I be so blessed? We live such a simple life here, but it is enough. For me, this is heaven.”