Longtime Island resident Grace (“Phronsie”) Vibberts Conlin passed away peacefully at Martha’s Vineyard Hospital on Thursday, July 9, a few hours before her 101st birthday. She was born in New Britain, Conn., on July 10, 1919, to Frank Gerald Vibberts and Grace Chamberlain Vibberts, the youngest of five children, after Eleanor, Frank, Anna, and Jack. 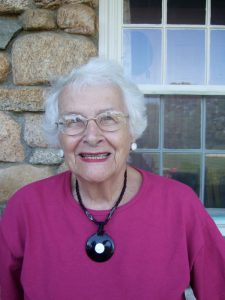 Phronsie first came to the Vineyard in 1922 when her parents rented a house in Harthaven. In 1930, they purchased a home overlooking Harthaven Harbor, where she grew up among a large extended family and learned the essential Vineyard skills — to swim, fish, clam and sail.

She attended the New Britain Elementary School; Mooreland Hill School in Kensington, Conn.; and Abbott Academy in Andover. She graduated from Smith College in 1941. On December 7, 1941, the Japanese bombed Pearl Harbor, and almost immediately Phronsie enlisted in the Navy as a WAVE (Women Accepted for Volunteer Emergency Service) and was sent back to Smith for Officers Training School, then to Mount Holyoke College to study encryption and finally to New York, where she coded messages sent to ships at sea.

In 1951, she married Edward J. Conlin Jr. and they had three children, Phronsie Ann; Edward Joseph Conlin III, better known as Jed; and Frank Vibberts Conlin. Phronsie raised the children in Middle Haddam, Conn. Their house faced the Connecticut River, and from a wide verandah they sat contentedly after work watching the boats go by.

In 1981, her husband Ed passed away. Seven years later, with the encouragement of her lifelong friend Ba Dutton and many others, Phronsie built her own home in Harthaven, where she spent the rest of her life. She was always busy. She volunteered at the Chicken Alley Thrift Shop until shortly after her 96th birthday. She loved to record family history and the doings of many friends, keeping files of newspaper clippings, photographs, and correspondence. Her mother, Grace Vibberts, was a gifted artist, and so with the help of her good friend, Beth Tveit, Phronsie archived her paintings and created a website featuring much of her work. She was an avid gardener well into her late nineties.

On July 10, 2019, Phronsie celebrated her 100th birthday at the Portuguese-American Club. About 250 of her friends attended. She stood for hours in a receiving line welcoming her guests and chatting with each of them. “I remember her going around and having the best conversations,” her cousin Martha Abbot recalls. “She had a very wide network of friends because she was interested in everyone, and could keep track of so many people’s lives and the details about them.”

In the few days since her passing, a flood of memories has arrived. Here are some of them:

“She was funny, always with an amusing tale to tell,” says her cousin Val Hart. “She was a great listener. You had her full attention as if you were the only person in the room. She was inspiring in the way she lived a vigorous life even in old age. She went out in style, youthful to the end.”

Niklas Hart, a cousin, was born in Norway, and knew little about his American family other than the photographs his father, Kim Hart, had shown him. When he visited the island in 2009, Phronsie took him by the hand. “I never really knew the family tree that well, but through Phronsie I got a better picture of it, and got to know the family stories. She would make the people in the pictures come alive. She would narrate the newspaper clippings and old family Christmas cards that she had stored in her basement. She made me feel like a real part of the family.”

“I would go to visit her thinking I was doing it to lift her spirits,” says Martha Abbot, “and she always lifted mine! She made me laugh a lot. Her mind was so sharp, and she was so engaged in life!”

Phronsie has the biggest heart,

loving people is her art.

Phronsie has the biggest laugh,

Having fun’s her other half.