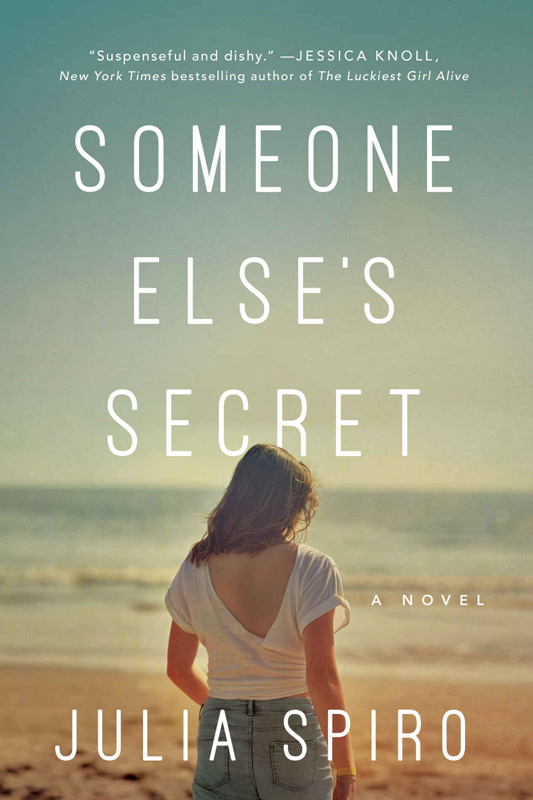 The thing about holding someone else’s secret is that it’s a burden to bear, which can have its own impact on the keeper — as well as anyone learning about it. Such is the case in Julia Spiro’s “Someone Else’s Secret,” which tells the engrossing story of a far from idyllic summer on the Island — one that takes place primarily within the rarefied social strata of the Edgartown uber-wealthy seasonal families.

Spiro launches us into her tale with a prologue with an ominous trauma that can set your teeth on edge with the tension it creates. She gives us hints, which we can only assume have to do with the title’s secret, of what’s to come, with the unknown narrator’s recurring nightmare and what caused it:

“The lighthouse stood before her, a passive lump of material yet somehow alive at the same time, beckoning her, calling her, pulling her closer. She waited. And then she heard something. But this time, it wasn’t the familiar noises that she usually heard. It wasn’t just the wind and the sounds of the water at night. It was a voice, calling to her. A tiny, little voice tucked away in the corner of the lighthouse’s dark shadows … Over and over, the voice called to her … She needed to see it … Stepping closer, she approached the voice, until it became a scream, a wrenching, metallic scream that was suddenly right before her, echoing through her ears, piercing her heart. And she saw, at last, who the voice belonged to. She stared back.”

She writes too that during her waking hours, the secret the woman keeps makes her “unable to face the effort to go about her day, to be someone who wasn’t carrying around this memory like a dead weight.”

Spiro tells the story of the unfolding summer drama “Rashomon”-style, alternating between 22-year-old Lindsey, a recent college graduate who comes to the Vineyard as a nanny for the young son of an influential family, with their promise of help in getting into the Boston art world she longs to enter, and Georgie, the painfully adolescent 14-year-old daughter in the throes of a struggle for the independence and romance she sees in her older counterparts. Spiro explains, “For both women, it’s a formative summer in which they’re determined to figure out who they are and create the lives for themselves that they want.”

Both Lindsey and Georgie feel like supreme outsiders. Lindsey experienced it at Bowdoin College, where she was on scholarship, and economically and socially isolated from the privileged life of her classmates. During the summer, she has friends on either side of the divide — both locals as well as summer folks, which sometimes makes for conflicting allegiances that necessitate carrying secrets, and leads to self-betrayal of her actions in order to fit in.

Spiro so viscerally renders Georgie’s feeling of awkward adolescent alienation as she tries desperately to be part of the older crowd that you might cringe with memories of what that stage of life felt like, whether or not the specifics match your own experience.

As Spiro draws us ever toward the major secret in the novel, she plants plenty more throughout that creates a complex web of relationships between the characters — mostly among the young people, but the adults aren’t completely left out. She builds the major characters who drive the storyline with complexity, so you are never quite sure if you can trust them or not.

A key component in Spiro’s book is how Lindsey’s socioeconomic circumstances push her up against a wall of options with life-changing consequences. Reflecting later at the end of the book after a decade has passed, we read, “The crossroads that Lindsey had found herself 10 years ago — when she felt like she had to choose between telling the truth and living the life she had always wanted — had drawn her back into its clutches.”

Spiro says, “This is a book about bravery, identity, ambition, complicated friendships, socioeconomic barriers, and societal structures that silence survivors.”

Spiro, a year-rounder on the Island for three years, started writing “Someone Else’s Secret” when she was an executive at Warner Bros. Pictures in 2017, and, interestingly, the book has a cinematic feel both in her ability to evoke the essence of the Vineyard as well as the way she unfolds her story. Asked about her motivation for writing the novel, she answers, “I simply wanted to write a book that I’d want to read — one that tackles important, emotional, complex issues, but that doesn’t hit you over the head with them. Personally, I don’t want to read a book that’s entirely grim. I need a level of escapism and humor, so that was important to me, even though I wanted to book to pack an authentic, emotional punch.”

And lucky us, this is exactly what “Someone Else’s Secret” does.

“Someone Else’s Secret,” by Julia Spiro; Lake Union Publishing. Available at Bunch of Grapes and Edgartown Books for $24.95, and online. Author’s talk, July 21, at 7 pm, via the Edgartown library. To request a Zoom link to the author’s talk, email programs@edgartownlibrary.org.