Hillary Landers passed away on Thursday, July 23, 2020, after a long illness. 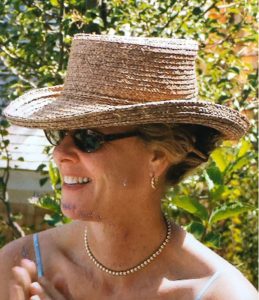 Hillary was born on July 4, 1957, in Pittsfield, the daughter of Betty and Jack Landers. Her formative years were spent in Weston. She attended secondary school in Milton, and Mount Kisco, N.Y. She graduated from Skidmore College in 1982, where she majored in political science and history. Hillary was a four-year varsity member of the tennis and basketball teams. Her athletic prowess earned her induction into Skidmore’s Hall of Fame.

After graduation, she worked as a corporate auditor for General Electric. In 1985, she moved to Martha’s Vineyard, her home for much of her life. She worked as a realtor for Barbara Nevin Real Estate, and later, with Lisa Stewart, started her own realty company in Edgartown, called Lighthouse Properties.

Hillary suffered a tragic accident in 2006 that left her a quadriplegic. She spent her last years in Harwich and Yarmouth. Hillary was a devoted mother to her son Jason (Polaski) of Hampden, Conn. Hillary leaves behind her sister Sue, brother John, and many other family members and friends who loved her and were inspired by her strength and irrepressible, optimistic spirit.

She was predeceased by her parents, and brother Glenn.

A family funeral service is being planned, and a celebration of Hillary’s life will be held when we can all safely gather. In lieu of flowers, donations may be made to the National Federation of the Blind, or a charity of your choosing. For online condolences and details, please visit nickersonfunerals.com.