We have a 1-year-old, 65-pound rescue (mostly shepherd/Lab, based on DNA analysis) and two active, 12-year-old kids. The dog is very playful the majority of the time when running around with the kids in the backyard, but there are occasions when he seems to get into an aggressive “mood” (usually when the kids get loud). This mood results in the dog nipping at the kids’ ankles and at times trying to tackle them. This leads to the kids screaming louder and results in a vicious cycle. What would you suggest we do to change this behaviour?

First, on behalf of the dog you saved, let me thank you for being a dog rescuer. The unwanted behavior you describe is not uncommon in young dogs. Interestingly, your dog (let’s call him “Tackle”) is about the same age (in dog years) as your kids, but, needless to say, he’s going to mature a lot quicker than your children. As your kids enter their teens at age 13, Tackle will be a young adult in another year. There’s no domestic animal that reads the body language and emotions of humans better than dogs, and the louder and wilder kids play, the crazier and rougher most dogs will get in their play. So, the two-legged preteens need to be carrying dog treats when they’re in the yard, and when things start to get out of hand, it’s time to redirect Tackle, using the treats. It can be as simple as the kids standing 50 feet apart and calling Tackle to come back and forth, and having him sit when he arrives to earn the treat. It will also work toward conditioning him to come when called and sitting politely upon arrival.

Another great game that’s fun for both the two-leggeds and four-leggeds is “Go Find.” Have one of the kids hold Tackle back, or have him “stay” if he’s trained and cooperative enough, while the other child lets Tackle know he’s holding a treat as he backs up while facing the dog, and then lets Tackle see him place the treat behind something, a bush, tree, toy, whatever. Then he’s told, “Go find the treat!” Or you can have one kid hold Tackle back while the other child hides himself, with lots of praise in addition to the treat when found. Initially, make the “finds” easy for Tackle because you want success to build on success. As the hiding spots get more and more difficult to find, he’ll really start using his nose, transitioning from visual to scenting. Both the dog and kids will love playing hide and seek. So, the solution to Tackle’s obnoxious roughhousing is redirection from play fighting to earning treats through mind expansion games.

Good luck and have fun! 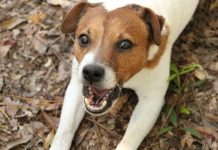 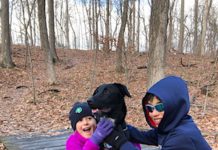 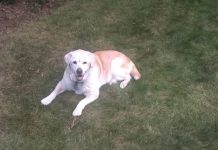