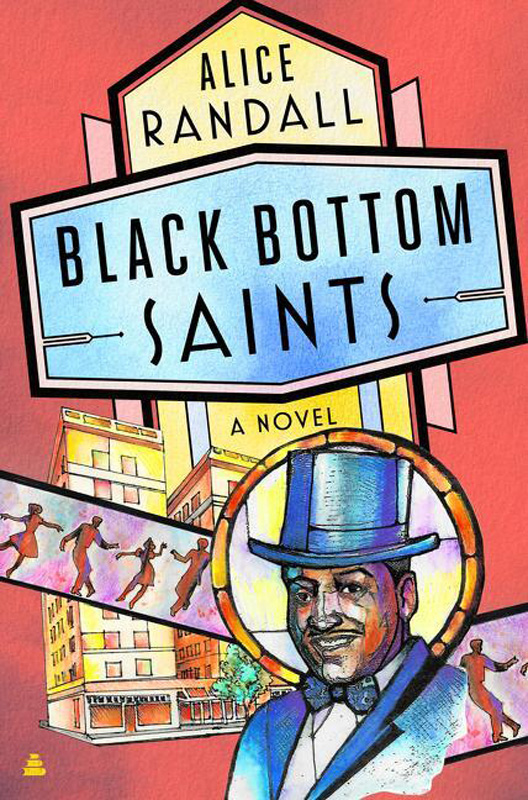 Alice Randall is a consumate wordsmith and has gifted us with a complex and ambitious work of literary fiction. The author’s “Black Bottom Saints” takes time to savor, as her language is not always on a direct trajectory, but full of evocative imagery.

It is a novel of interlocking profiles, written by Joseph (“Ziggy”) Johnson on his deathbed. Randall explains, “The real Ziggy Johnson owned the dancing school I attended, and he wrote an entertainment and gossip column for about 20 years as a journalist for a Black newspaper called the Michigan Chronicle.”

Ziggy identifies completely with Black Bottom, a predominantly Black neighborhood in Detroit, which in the first half of the 20th century was a mecca of Black culture. “In Black Bottom, charm and squalor, nature and industry, opportunity and obstacles, citified and country time, got all shook up into a strong cocktail that made a person believe they could do what they wanted to do, they could be who they wanted to be,” Randall writes in her skillfully evocative language.

Ziggy’s tome, divided into seasons describing various “saints” he’s known, is fashioned after a “Book of Saints,” traditionally a comprehensive biographical dictionary of Roman Catholic saints. Randall had four criteria in choosing her saints. “Ziggy Johnson knew them; I could physically locate them within the Gotham Hotel in Detroit, which was the No. 1 Black hotel in the world; all appeared in Ziggy’s column; and they had been in Detroit significantly,” she says. “And finally, that Ziggy thought they knew something about moving from trauma to transcendence.”

The summer season depicted in the novel is all about the roots of the Black experience in the 19th century, and the characters are Ziggy’s teachers. One was his mother, whose Catholicism greatly impacted him. “The power of Mama’s church was not God,” Randall writes. “It was the address to all five senses. Church was my first place where the sight, the sound of beauty, the taste of beauty, the touch of beauty, and the scent of beauty all enveloped me at once … Mama … taught me to trust five-sense pleasures as a promised balm of Gilead.”

Appropriately, another summer saint is Thomas Bullock, who in 1917 became the first African American to publish a cocktail book. And Randall ends each profile with a cocktail recipe, which she sees as a “taste narrative” that amplifies a particular theme of the chapter.

The saints of fall face the harshest challenges. Randall explains: “Three are literally murdered, two kill themselves, one is the victim of domestic violence, another is unjustly prosecuted by the federal government, one has her art stolen, another has an entire collection of her paintings vanish under suspicious circumstances — and yet each and every one burns bright before they are eclipsed by a world that refuses to acknowledge their full worth — and these saints provide true inspiration for our hardest days.

“The saints of fall shine light to us, but are ultimately, profoundly tragic,” Randall says. “They are the beacons of why we must make this world a better place. Because the world as it is is too horrible to let some people live.” She points to Tanya Blanding who, as she details, didn’t get to overcome anything — a 4-year-old girl shot dead in her home by the state police during the 1967 Detroit riots.

For Randall, the saints of winter have the most distinct genius for resilience. They rise from things you think you can’t rise from. In thinking about this season, Randall points to Sammy Davis Jr. She says, “Ziggy’s Sammy isn’t the Sammy you probably know. This is a man raised by two fathers, a man who writes an autobiography, a man who calls out racism … a man who struggles with having legendary parents, even as he achieves a legendary status of his own.”

Randall shares, “I adore all the saints of spring. They are the people who, despite all odds, get to truly thrive. They are the miracles.” Selecting just one saint of spring, Randall chooses Dr. Alf Thomas, saying, “Alf founded three different hospitals, owns his own island between Detroit and Canada, and he served on the board of Meharry Medical College and on the board of the Detroit Symphony.”

A third layer of “Black Bottom Saints” is a running novella of a character named Mari, Ziggy’s goddaughter. Randall says, “She is ‘every woman’ who is determined to spot hard-won happy despite so much that has come against her.”

This dedication to resiliency started with Ziggy’s dance school, which meant something important to Randall. “Ziggy’s school had been a resiliency academy for me. He was interested in creating powerful citizen girls. I realized that Ziggy, along with my father, had helped prepare me for a very dangerous world that I decided I was really willing to share with others,” Randall says. “I support the Me Too movement. But I realized there was another message without minimizing the harm, the magnitude. I realized there are ways through other people’s horrible days. That their worst day doesn’t have to define their best day. And when I decided to tell that story, I decided to write this book.”

But Randall insists, “On the other hand, it’s a very happy book about very hard things. One of the first things I learned in Ziggy’s school is that joy is radical.”