John Edward Behrle (“Jack”), 74, of Haverford, Pa., and Chilmark, died unexpectedly and peacefully in his sleep on August 11, 2020. He was on Martha’s Vineyard, his “happy” place, where he spent the last day of his life doing what he loved most: the regular 15-mile bike ride; sunning and swimming at Lucy Vincent, his favorite beach; and then entertaining his extended family for a lobster dinner at home. 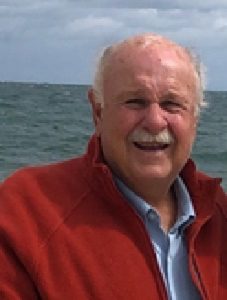 He was born in Yeadon, Pa., the eldest of five, to Edward Behrle and Janet (Fielding) Behrle. He was a 1963 graduate of Upper Darby High School, and a 1967 graduate of the University of Virginia, receiving a B.A. in economics. Following graduation, he served in the Vietnam War from 1967 to ’69 as a photojournalist for the Stars & Stripes newspaper. Following his service, he married Anita Swartz, now Behrle Phillips, and fathered two sons, Joshua Edward and Benjamin Fielding. During this time, he worked for material handling corporations in various capacities.

In 1998, he married Wendy Carolyn Wolf, and enjoyed a fabulous, loving partnership for 22 years. He was national accounts manager for Caterpillar Industrial until his retirement in 2005.

In his spare time, he combined two of his favorite activities, skiing and travel, with his membership in OFOS (Old Farts on Skis) and the Main Line Ski Club, a suburban Philadelphia-based club. Jack was responsible for organizing trips: nine to various European ski locations; two to Lake Powell, Utah; and one to Athens, the Greek Islands, and Istanbul.

He was passionate about Martha’s Vineyard, where he and Wendy spent extended periods of time over the past 22 years, graciously hosting numerous friends and family members. He also enjoyed cars, motorcycles, Scrapple, and email exchanges with close friends.

A Zoom celebration of life will be held on Thursday, Sept. 10, on what would have been his 75th birthday. Contributions in his memory can be made to the Island Grown Initiative, a local food sustainability nonprofit where he volunteered, at P.O. Box 622, Vineyard Haven, MA 02568, or online at igimv.org.