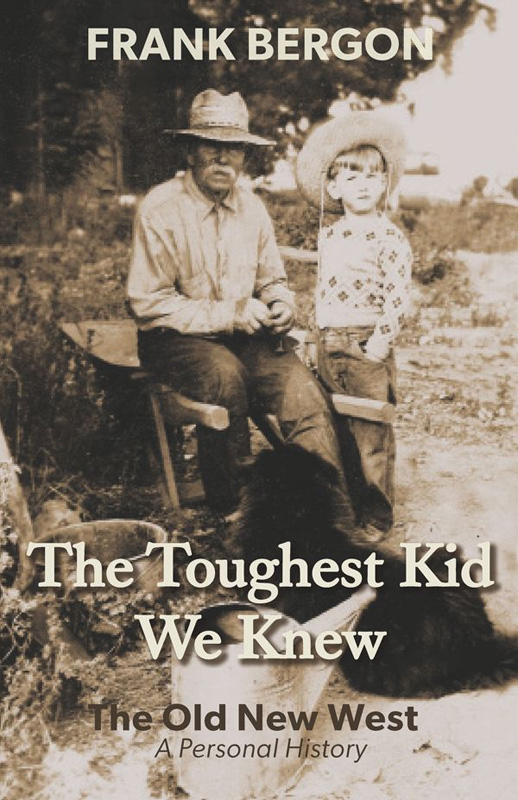 Frank Bergon has made a terrific life for himself as a literary professor, an editor, and author of a handful of novels and several recent books summing up life and a singular culture in California’s San Joaquin Valley, where much of the food we eat is grown, and has been grown for generations.

Bergon was a panelist at the 2018 Islanders Write conference, hosted by this newspaper and Arts & Ideas magazine. He’s always written about the West, and his specialty now is what he calls the “New Old West.”

Essentially that means that he notes how the physical landscape and farming have changed, but the cultural values live on. Hard work is a prized quality in his Madera County world. Honesty and keeping your word are requirements. And family and more family. Then there’s the importance of community to individual well-being, and our personal responsibility to our community’s well-being.

What we get in Bergon’s “The Toughest Kid We Knew” are a series of robust, luminous essays on the people and families, including his own, that settled this out-of-the-way Eden in the mid-19th century. It’s a more micro, detailed look, following “Two-Buck Chuck and the Marlboro Man” (April 24, 2019, The Times), which set a cultural tone to his valley.

What we learn is that the San Joaquin Valley was perhaps — and is today — one of the most intense ethnic polyglots we’ve ever had in this country. Natives of virtually every continent gathered here, retained and shared their culture and food, and created a common culture without discernible discrimnation.

I mean, when you live, work, and school with immigrant Basques, Spaniards, Asians, Blacks, Mexicans, Scandanavians, Native Americans, Okies, Eastern and Western Europeans, Pacific Islanders, and more, all working dawn to exhaustion for a foothold, it isn’t worth the effort to figure out who you’re going to put at the bottom.

So there’s an overriding and welcome sense of well, equality, in both books that makes us want to know more. I particularly liked the idea of a successful rancher, at the end of a workday, rubbing the feet of an old cowboy who’d worked with him for 40 years, a story recounted matter-of-factly by Bergon.

Bergon has written tales of humanity as well as hell-raising and thigh-slappers into his collection of essays here. It works in one respect because of the valley’s out-of-the-wayness. Seems to me that local colonies grow their own cultures fast and strong. San Joachin is rural. My own experience was similar, though in an urban community that the outside world avoided. The cultural result was not so healthy in my case, but was largely healthy in Bergon’s.

He’s also stitched a bit of a morality play into this opus, a welcome thread in this particular period of public discourse. I think we want examples of living within a moral order right now. Bergon’s story of the foot-rubbing rancher has biblical overtones, to be sure. But it also describes a man who remembers who he is, the men who came before him, and that we are all from the same place. He was living his culture.

Now, Bergon’s valley is physically a far different place today than 60 years ago, where many of his reminiscences take place. But one of the values of old age is that you have lived in the experiences of past generations.. So if your memory holds and you can write as well as Bergon, you get to pass on clear looks at the past. (Full disclosure: Bergon is one month younger than I am).

You’ve been waiting for 10 paragraphs to learn who was the toughest kid in Bergon’s world. Bergon thinks it was Billy Martin, a transplanted Okie and product of an alcoholic home. Martin is described as an otherwise well-socialized young man, well-liked by the ladies, who just had a need to fight and to win. Martin was shot to death at age 27 by an estranged husband.

My candidate for toughest kid in his book is Bergon’s then 17-year-old Basque grandmother, who crossed the Atlantic to New York by herself in 1909, then crossed the country alone to marry Bergon’s future Basque-born grandfather in Utah. The couple had never met, but decided to marry based on character creds provided by family and friends.

“Toughest Kid” is not a collection of happy-talk remembrances, though there are those. It’s more a collection of past generation experiences and insights, based in fact and reality, that are important for generations after us to know, to help anchor their place in the world.

“The Toughest Kid We Knew,” a memoir by Frank Bergon published by the University of Nevada Press, $24.95 at Island bookstores and online.