Walter L. Winfree (“Sonny”), 85, passed away peacefully while attempting to regain his strength at a health facility in Wayne, N.J., on July 26, 2020. Walter was surrounded by love and family during his battle before being called home as a faithful servant. 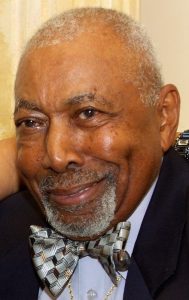 Walter was born on Nov. 7, 1934, the second of four children born to Walter Sr., a first responder with the N.Y.C. Ambulance Corps and Minnie (née Hollis), a critical care nurse at Queens Hospital. A product of N.Y.C. public schools, Walter was a gifted student and multisport athlete, ultimately graduating from N.Y.C.’s elite Brooklyn Technical High School. It was during this era that his legend as a track athlete, specializing in the 110-yard and 220-yard hurdles, began opening doors for collegiate opportunities. Moreover, his track and field legend was underscored by his prowess on the gridiron as a tailback and flanker for the Corona Condors Football Club. This was during the heyday of N.Y.C. club sports, when club teams generated more interest and passion than professional teams! The Condors were a legendary multiracial team noted for undefeated seasons and for filling bleachers wherever they played.

Athletics and academics presented Walter with the opportunity to attend the University of Michigan as a track and field athlete, and invitee to the hallowed Wolverine Football team, in 1952. He thereafter transferred back to his beloved N.Y.C. where he attended City College, ultimately completing his collegiate career at Seton Hall University in 1956, and receiving a diploma in accounting. A stint in the U.S. Army followed, and he was stationed at the Fort Huachuca Military Intelligence installation near Sierra Vista, Arizona. To the wonderment of his fellow G.I.s, Walter often challenged base leadership to champion the rights of Black and Hispanic soldiers in the neighboring community, especially since federal dollars and resources supported what would have otherwise have been a backwoods mining camp.

Upon his honorable discharge from the Army in or about 1960, Walter returned to N.Y.C. to continue his lifelong romance with Ruth (“Tootie”) Woods of Newark, N.J., whom he ultimately married in 1962. Walter and Ruth had been introduced by lifelong friends Leander and Ken Brown of Maplewood, N.J. Ken was Walter’s Seton Hall roommate, and Leander was Ruth’s Delta Sigma Theta line sister. Walter and Ruth enjoyed summer vacations in Martha’s Vineyard with the Brown family for 54 years. Walter built a career as a tax accountant (ultimately becoming a fixture in the Hollis, Queens, business community, affectionately known as “H&R Black’), business executive, and entrepreneur. He and Ruth raised two sons, Glenn and Gregory, first in Queens Village, and then in their home of 46 years in Roosevelt, N.Y.

Walter and Ruth moved to a wonderful elder community in Pompton Plains in March 2020 when Walter’s health began to decline.

Walter was preceded in death by his parents, Minnie and Walter Sr., and by his older brother Raymond. He is survived by Ruth, his wife of 58 years; his sons and their wives Glenn (Vera) and Gregory (Frances); his grandson (“the Heir”) Ellis; sisters Marion Winfree Phillips (Herb) and Barbara Winfree; nephew Curry Winfree (Blossom) and his family; niece Michelle Winfree; sister-in-law Mary Deane and her family; goddaughters Denise Brown-Allen (Doug) and Leah Brown and their families, and a legion of family, friends, colleagues, swim/ski/golf/fishing buddies, raconteurs, well-wishers, and others.

This obituary would be remiss without a special acknowledgment of Steve (“Toonkie”) DePass — “America’s Singing Poet” — whose friendship and professional affiliation with Walter dates back to their days as kids in Corona, Queens, and teammates on the Condors (Steve coined, and was the only person allowed to use, Walter’s Condor nickname, “Wimp”). Indeed, Toonkie captures Walter’s essence best: “Walter, Walter, Rock of Gibraltar, never a stumble, never a falter.”

A private memorial service on the Nantucket will be held on Thursday, August 27, 2020, at 5:30 pm. A repast is scheduled at the family home immediately following the services.