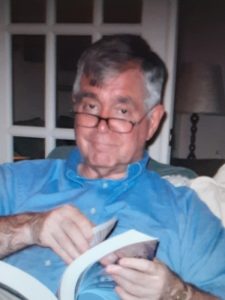 Frank was the son of Ann Sears and Moreau Yeomans, and was born on Oct. 23, 1939, in New York City. He attended Milton Academy, graduated from Harvard College in 1961, and graduated with a master’s degree from Trinity College in Dublin, Ireland. Frank was a star sprinter while attending Harvard. Early in his career he was a history teacher, but soon after that became a wealth advisor. He worked for several Boston firms prior to starting his own company, First Lexington Capital.

Frank had three children, Stephen, Peter, and Christopher. Peter died tragically at age 4 in a drowning accident in Canada.

Frank’s many interests included tennis, rugby, wrestling, track and field, and sailing. He was most relaxed while sailing, and owned a 35-foot sailboat for many years. After he moved to Martha’s Vineyard, he became very involved in local politics, and served on the Chilmark finance committee.

Frank is survived by his wife Sylvia Yeomans; his stepson Adam and wife Aimee; and his two sons, Stephen, and Christopher and his wife Jennifer.

There will be a private ceremony. A celebration of life will be held at a later date, yet to be determined.