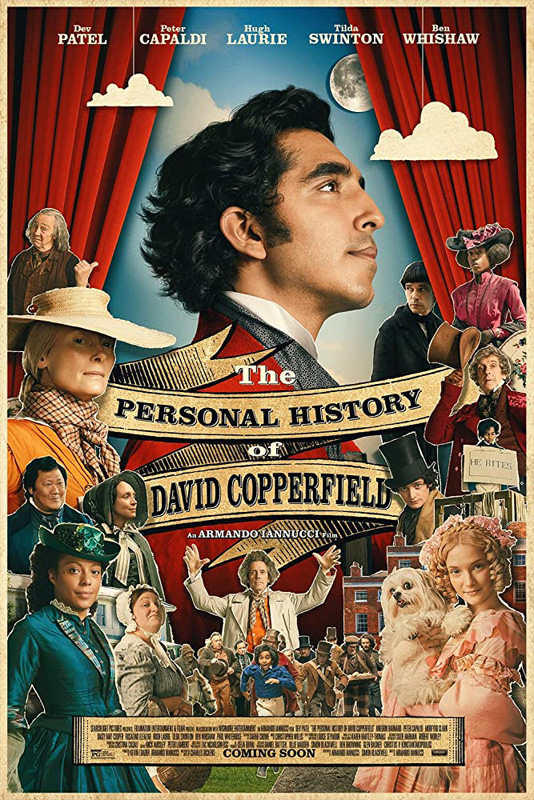 “The Personal History of David Copperfield” arrives at the M.V. Film Center on Saturday, Sept.18. Charles Dickens is at his best in this lively and complicated comedy/drama, directed by Armando Iannucci and starring Dev Patel as Copperfield. Patel launched his career in 2008 with the multiple-Oscar-winning “Slumdog Millionaire.” Iannucci is also known for directing the critically acclaimed satire “The Death of Stalin.”

Based on Dickens’s eighth novel, widely considered his masterpiece, “The Personal History of David Copperfield” — the eighth cinematic version — begins with Copperfield speaking to an audience as an adult about his up-and-down life story. Then he heads back into his infancy, watching his birth. As a child he is played by Jairai Varsani, and his widowed mother Clara (Morfydd Clark) remarries Edward Murdstone (Darren Boyd). This authoritarian and cruel stepfather beats David, who gets his revenge by biting him. Murdstone sends him to work in a London bottle factory, and he takes up residence with the debt-ridden Wilkins Micawber (Peter Capaldi) and his family.

Now an adult played by Dev Patel, David learns after the fact of his mother’s death and funeral. Another character of the dizzying many in the story is his nurse Peggotty (Daisy May Cooper), who from David’s birth remains a loyal supporter. He visits Peggotty in Yarmouth at her upside-down boat, where he meets Emily (Aimee Kelly) and Hamm (Anthony Walsh). Much to his shock, Emily runs off with David’s friend James Steerforth (Aneurin Barnard). In the meantime, David, who has acquired several other first names, heads to London and schooling there.

As an adult, David goes to Dover and stays with his Aunt Betsey Trotwood (Tilda Swinton). There he meets Betsey’s eccentric cousin Mr. Dick (Hugh Laurie), who writes stories about Charles I and is given to flying kites. Like Dickens, David begins writing, which will ultimately become his career. While at Betsey’s, he meets Mr. Wickfield, business manager for his aunt, and Mr. Wickfield’s daughter Agnes (Rosalind Eleazar), who will play an important part in the future of the story.

Enter Uriah Heep (Ben Whishaw), an accountant and devious individual, who ends up causing serious problems for David and his Aunt Betsey.

One of the remarkably modernized elements of the story is its multi-ethnic casting. From Jairaj Varsani as young David to Dev Patel as the adult David, and Rosalind Eleazar as Agnes, as well as her father Benedict Wong, the characters are a variety of colors and nationalities.

Despite its lively and charmingly comedic telling that condenses the novel into a two-hour film, “The Personal History of David Copperfield” is a challenge to keep track of. It is a rollercoaster of adventures and misadventures that make it worth watching more than once.

Information and tickets for “The Personal History of David Copperfield,” playing only at the M.V. Film Center, are available at mvfilmsociety.com.