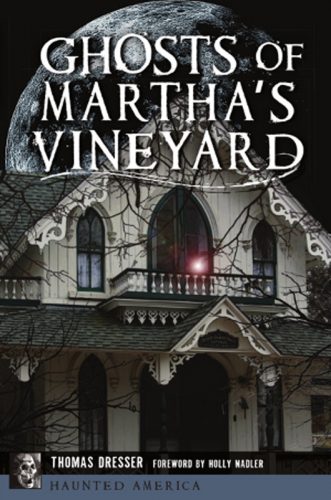 Some 26 years ago, the first collection of Island ghost stories arrived on our shores, or more specifically our bookshelves. “Haunted Island,” from Down East Books of Camden, Maine, was penned by some crazy lady — oh, heck! It was me! And how did I come to be the ghost lady of Martha’s Vineyard? Well, you can read all about it in the introduction to Thomas Dresser’s new collection of spooky tales, because why? Oh, because the introduction was written by me too!

But enough about me (and what did you think of “Haunted Island,” followed by “The Ghosts of Boston Town,” “Vineyard Confidential,” and “Vineyard Supernatural”?), someone else, namely Mr. Dresser, and with my full blessing, has taken up the challenge of acquainting us with all the wraiths of the night that tap on our windows on moonless nights, leave mysterious slices of toast and jam in the pantry when no one could possibly have visited, and whisper our names when, again and alas, no one is there.

My friend Tom Dresser arrived on our shores in the second half of his life, originally a hospital administrator on the trail of his love from childhood in Central Massachusetts, the charming Joyce. He also, once arrived, pursued another delayed love, and that was writing. He made up for lost time by first marrying Joyce, and then going on to produce a dozen books through the History Press of Charleston, S.C. These titles include “African Americans on Martha’s Vineyard,” “Whaling on Martha’s Vineyard,” and “The Rise of Tourism on Martha’s Vineyard.”

To be perfectly honest, I used to joke that the prolific Mr. Dresser churned out a new book every month, and it’s only owing to his supreme kindness that he hasn’t lain in wait for me at the crossroads at midnight and made a ghost out of me.

All that being said, with his new oeuvre delivered into my hands, I was delighted for an opportunity to sit with a new set of eyes on our seaside towns packed with occult happenings. Tom’s huge capacity for historical context brought a special feature to these tales of “Gotcha!” Along the way, we readers receive an ultra-professional tour of the Island.

For example: Tom’s section on Edgartown starts us off with the import of colonial inns, quoting our first great historian, Charles Banks: “Each town was obliged to keep a ‘house of entertainment’ for the convenience of strangers, and in 1656 was made liable for not keeping an ‘ordinary,’ as taverns were called in those days.”

Did you know this? Neither did I!

This town-making precedent allows the reader to wander from hotels to taverns to quaint inns, all changing management over the centuries, but purveying the whole time some consistent form of occult atmosphere. In other words, ghost stories muster as an additional fun factor, but that doesn’t prevent us, within these pages, from learning loads from the cultural timeline.

Even longtime Vineyard residents may download new indices, such as twisted geographical tales of how North Tisbury detached from Holmes Hole and lay South above North, or something to that effect. Even if you’re confounded in your grasp of the terrain, you can trust you’re in good hands with Thomas Dresser’s immaculate sense of Island history.

The final stretch of the book provides a deep dive into the Vineyard Gazette archives for ghost stories collected over the decades, personal testimonials, and cemetery tours conducted by Tom personally. And by the way, he entered this crazy subject of Island ghost stories — because his publisher asked him to — without any preconceived ideas that the things that go bump in the night had any substance whatsoever. And then after months of interviews with real people — believable people, many of them people he knew, often well — he resolved there was “something out there.”

I warned him this would happen.

The book is lovingly packed with great photographs, many of them taken by Tom himself and his talented wife, Joyce Dresser. Also, you’ll see for yourselves how wonderful are the photos on the front cover of a Campground cottage on Clinton Avenue — the one made famous by a several-night-stay by President Ulysses S. Grant — and a shot of the overhaunted cemetery in downtown Vineyard Haven, along with an insert by Tom Lovewell of the spook-infested Edgartown jail. These snaps by the Dressers were shipped to the History Press, rendered extra magically creepy by an unknown artist, and are now presented to the public as a new, immortal feature of our continuing scary local ghost scene.

Tom, with his new book about ghosts, has already been booked into virtual lectures, the first looming on Oct. 7 at 7 pm, through the Edgartown library’s Zoom Room.

Farm to shuck to Food Pantry

They deserve a level playing field