In August 2020, Jeffrey Shenefelt died at his home in Vineyard Haven. 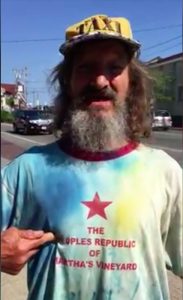 Jeff was born in Cincinnati, Oooo-high-oh, as Jeff liked to say, on Feb. 1, 1952, the fourth of six children. He attended grade school in the Indian Hill section of Cincinnati, in his spare time volunteering at Camp Stepping Stone to care for disabled children, which began a lifelong practice of caring for those in need — disabled children and adults.

He briefly attended Ohio University in Athens, Ohio, before heading West to live in the Mission District of San Francisco. In San Francisco, he made lifelong friends and took classes at the Art Institute of San Francisco, where he made an awardwinning clay animation film, and enjoyed painting in many forms. Jeff also began driving a cab, which became another large part of his life.

From San Francisco he moved to Boston, and continued to drive a taxi. His paintings and stories from this time in his life are legendary among his friends and acquaintances. He also carried on his love of caring for others by working at Fernald State School in Waltham, then known as a home and treatment center for “mentally retarded, emotionally disturbed adults.” The most violent of the residents were collected into one building, Farrell Hall, where I met Jeff, working with men in a locked ward, practicing nonviolent self-defense, encouraging them to do their best, smiling mostly, and always having a kind word or deed about to be done or just completed.

After Fernald, Jeff moved to Martha’s Vineyard in 1990, having seen an ad in the Gazette that workers were needed in a “halfway” house on Barnes Road to care for residents who were challenged mentally and physically. He lived in a friend’s house in Edgartown for three years or so, and met his love, Lynn, at an AA meeting. Jeff had recognized that alcohol had made his life unmanageable while living in Cambridge, before his move to the Vineyard. Jeff drove a taxi on Martha’s Vineyard, and worked in the produce department of Reliable Market.

Lynn and Jeff lived in Oak Bluffs and Vineyard Haven. It was Lynn’s dying wish that Jeff not drink again, and Jeff did his best to honor that wish, thankful that he had had the time he did with Lynn, knowing her wish was his wish. Approximately five years ago, Lynn died of respiratory failure in Jeff’s arms, in the same room where Jeff later died. Jeff carried her with him at all times by wrapping pieces of her clothing onto the staff he carried. She was sorely missed.

Throughout Jeff’s life, God/Jehovah and Jesus were prominent figures. To him they, and the Bible (“Read Psalms through Revelations” he used to say), were guiding lights, protectors, teachers, and comforters. They were and are his salvation. He loved the Lord, a forgiving God who spoke to him often.

Besides his love of God and nurturing, he loved nature, starting with his days in Indian Hill searching for frogs, snakes, and salamanders in the local stream, through to his last days when he used to hop the bus to watch the sunset or sit in his backyard and commune with nature while constructing assemblages or painting nature, people, life.

He may be remembered as an “Island character,” walking in Vineyard Haven and Oak Bluffs mostly, singing and drumming at Open Mike at the Music Store, or dancing at Tivoli Day, the Ritz, the P.A. Club, etc. on one leg, his index finger pointing up to God, his hair long and stringy, his eyes closed in contemplation and sheer enjoyment of the music, the people he met, his opportunity to say a good word or do a good deed. He had a sense of style, was artistic, musical, lovable. His denim vest was handpainted by himself. On his back he wore the words, “Not Insane, Crazy.” He was a “wild and crazy guy” with a heart of gold.

Let us not be sorrowful. Let us rejoice in his homecoming. Jeffrey Allen Shenefelt has gone home to God, who gave him his life, for which we are eternally grateful. Rest in peace.