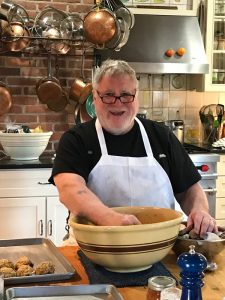 Summarizing a life well-lived by “Willy D” (his nickname, affectionately known by many) is quite a challenge. He was a force of nature, a live wire, a big guy with an even bigger heart. Sadly, that heart suddenly stopped beating, but the stories and memories are never-ending, unforgettable, and sometimes even unbelievable.

Will was born in Winsted, Conn., on Jan. 15, 1949, to Vinson and Millicent Holtham. He was a graduate of Carson Long Military Academy before attending Ohio State College and then Wentworth Institute of Technology. He played football and ran track, where he earned the nickname “the Mighty Burner.”

He fondly recounted numerous stories of working at and/or managing Valleys Steak House, Anthony’s Pier 4, and the Cummaquid Restaurant before owning and operating his beloved Home Port Restaurant in Menemsha in 1977, followed by the Bite and Square Rigger Restaurant.

Will was proud of the fact that he started working at the Home Port under the instruction of Chet Cummens by washing dishes and mopping floors, followed by years of hard work and tons of fun. “My favorite part was making people happy with my cooking,” Will said as he described his time at the restaurant as part of his fulfilled American dream.

He was a generous man with a passion for cooking, eating, entertaining, teaching, and bringing people together. It is no surprise that under Will’s guidance, lasting friendships and extended families were formed, and generations of employees developed an unrivaled work ethic. When not working in the kitchen or playing a prank on his next victim, he could be found golfing, fishing, hunting, or reclining in his favorite chair watching his boys, the New England Patriots, or searching for the next piece of yellowware on the internet. He could also be seen fearlessly darting around or into trees on his snowmobile through the backwoods of Maine, mapping out his plans the night before on what trails to ride.

Will leaves behind his wife of 28 years, Madeline Holtham; daughter Jessica Bradlee (son Parker Bradlee); son Michael Holtham (wife Jessie and daughters Jolene and Margot); and daughter Megan Bliss (husband Eli and son Harper). He is also survived by his sister, Judy Giegler (whom we are sure he would like to razz just one more time), and two nieces and a nephew.

If you find a piece of blue sea glass on Menemsha Beach, think of him — as Willy D would say, “It’s a thing of beauty, guy.” Fair winds, Willy. You were mahvelous, and you will be missed tremendously.

In lieu of flowers, donations can be made to your local food pantry, or to Martha’s Vineyard Fishermen’s Preservation Trust, P.O. Box 96, Menemsha, MA 02552

A celebration of life will be announced and held at a later date.