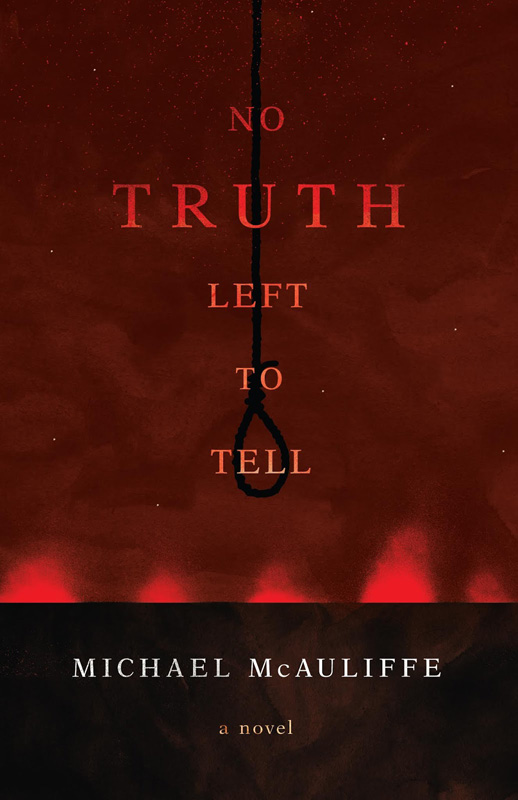 Michael McAuliffe has written a terrific first novel in “No Truth Left to Tell,” a story of race, police corruption, violent extremism, and the rule of law, set in Louisiana in the mid-1990s.

His storyline and writing deftness make “No Truth” a page turner. The spot-on relevance of its themes today, a generation later, somehow managed to give me perspective into the current national chaos.

The story revolves around a bunch of them good ol’ Klan boys firing up a bunch of crosses at the local temple, mosque, NAACP office, city hall, and on Nettie Wynn’s front lawn in the black side of town in 1994. Things went south in a hurry for the Klansmen after they lit up Nettie’s lawn.

And we’re off, as young civil rights lawyer Adrien Rush rushes down from the Justice Department’s D.C. headquarters to begin investigating things with local FBI guys Lee Mercer and Matt McClure. Now, McAuliffe’s done a lot of lawyering, and his Rush character is drawn on aspects of his own life as a young lawyer enamored with the rule of law, and his knowledge of how bad cops work. McAuliffe also takes us behind the legal scene to understand how strategic thinking works on the street and in the courtroom, by plaintiffs and defendants.

In “No Truth” we see strong character profiles being drawn, a welcome literary treat from a first-time novelist. For example, Nettie Wynn’s the grandmother some of us wish we had, and we want Fibbie Lee Mercer to get over himself. And given the legal landscape in America today, we get to see how justice works when political hackery isn’t present.

The comparisons of Lady Justice, then and now when her blindfold’s been removed, stays with the reader as McAuliffe’s plot twists and turns over several years, with some stunning developments for Rush. The novel is presented in two parts. The first revolves around the Klan capers and bringing miscreants to justice. The second deals with a moral conundrum for the rookie prosecutor. Rush has to work through personal anguish over action required of him by rule of law with regard to criminal rights.

On the bright side, there’s also a love interest, and the possibility of a second.

So why should we keep a literary eye on this rookie? He’s a five-skill player: plot, dialogue, character development, disciplined writing, and creativity.

In the creative bucket, for example, McAuliffe offers us thoughts from various characters that resound in our own life experience. He uses them often as chapter lead-ins or kicker chapter endings. Here’s a sample of my favorites:

Advice from Rush’s boss: “It can’t be some truth you’re telling, it has to be the only truth with nothing left to tell.”

Advice from a fellow lawyer: “You got my silence, but absolution isn’t something I can give you before you commit the sin.”

Rush on contemplating his boss’s desk: “It was the desk of a hub, not a spoke.”

A cop and a lawyer talking: “Truth is, everyone’s incomplete, so we try to fill up what’s missing with something.”

Those are “stop ya” lines that make readers stop reading and consider what they just read.

We spoke with McAuliffe last week by phone at his Chilmark residence.

Is Lynnwood real, or a fictional place?

It’s a fictional place, as are the characters, but the setting and the characters reflect details from my days as a young prosecutor with the civil rights division of the Justice Department. I worked Ku Klux Klan and police corruption cases in Louisiana and Mississippi in those years. So the book is autobiographical in that it’s loosely based on my experiences, now 30 years ago, as a young civil rights lawyer.

The book is set in 1994, but the story seems intensely topical today. Did you write it with current events in mind?

(Chuckles) It took me three years and 20-something iterations to get the published version, but it’s not lost on me that the period of time is relevant to events today, comparisons that show up in surprising ways to me.

Is there another book on the horizon?

Well, there is an idea percolating in my head, and a little on the page, that Adrien could be involved in investigating in the ongoing business of human trafficking.

“No Truth Left to Tell,” by Michael McAuliffe, paperback from Greenleaf Book Group Press, $16.95 at Bunch of Grapes, Edgartown Books, and online.