Royal Sinai Dumont passed away on Sept. 2, 2020, at the age of 98. In this new era of separateness, he was blessed to have his youngest daughter, Ann (Grenier), at his bedside for the last day. He was also known to family as Mickey, Mike, or Uncle Mickey, a nickname from an aunt who was not impressed with “Royal.” 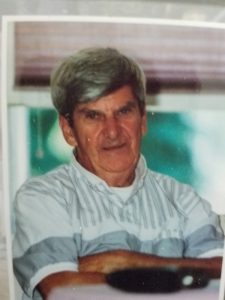 He was born in South Lowell to Arthur and Alida (Ida Lebuef) Dumont in April 1922. In grade school, he became bilingual, adding English to his French, and this began his lifelong love of language and words. He had a working knowledge of five languages. Royal attended middle school at St. Anne’s on the Hudson (currently Marist College) in Poughkeepsie, N.Y., then returned to and completed high school in Lowell.

Next up was the experience of WWII. Royal served in the Air Force in Northern Africa, then on to Italy. He returned home,and shortly thereafter met and married Hilma (Flanagan), his wife of 64 years prior to her passing in 2012. He finished his education at Boston College, then Boston University.

Royal taught junior high in Salem, N.H., for several years before moving to Poughkeepsie, N.Y., to work for the up-and-coming IBM (1956 to 1965). The family returned to Massachusetts, and Royal worked for IBM Boston until his retirement. After retirement, Royal returned to substitute teaching, as well as a stint at the IRS.

Royal embarked on a totally new adventure in 1980. He and Hilma (with strong urging from their children) purchased Misty Meadows Horse Farm on the isle of Martha’s Vineyard from Jim Alley and Bill Honey. He often claimed to have worked harder in retirement than prior to it. Royal was famous for the pony rides on Silkie the pony that he personally gave to hundreds of children during that time, and being forever the teacher, they became mini lessons. The time at Misty Meadows filled the need for contact with people. Dad loved people, and the folks he met, Islanders, summer folk, celebrities, financial wizards, artists, writers, politicians, became a part of the world he graced. In 2000, shortly after their 50th wedding anniversary, the Dumonts sold the farm to Jerome and Carol Kenny.

The final chapters of life well lived were spent as snowbirds between Martha’s Vineyard and Orlando, Fla., with travel to France to visit family.

It is hard to summarize 98 years. The facts are the facts. The essence of the man must also be acknowledged. My dad was a loving husband and father. He was kind, gentle, funny, and generous, possessed infinite patience, and was an optimist through and through. He was well-loved, and will be missed.

Royal was predeceased by his wife, Hilma, his daughter Sharon (Finer), and his grandchild Sidra. He is survived by his daughters, Karen Dumont, of West Tisbury, and Ann Grenier (Paul), of Temecula, Calif., and son Michael (Julia), of Maitland, Fla., as well as his grandchildren, Jessica Finer, Rebecca, Ben, and Jennifer Grenier, and Gabriel Finer; along with many, many nieces, nephews, and their families.

RIP, Dad. No more white canes or bus rides, and hopefully, a full table at the coffee shop in the sky …