When you find a restaurant that appeases all the diets, you’ve stumbled into something special. So when rumor had it that an “all vegan” restaurant was opening in Oak Bluffs where the old Park Corner Bistro used to be, reactions seemed split.

You had the vegans and vegetarians: “Finally — this is exactly what the Island needs!”

And then you had the avid meat eaters: “Great. So I won’t be eating there ever.”

Day by day over the winter and spring, we started to see this Oak Bluffs eatery slowly transform. We saw the seafoam green paint, the signage, and finally: “Pawnee House: Now open.” We could finally start to unpack the mystery of what’s on the menu. And I have good news: There’s a little something for everyone.

Owned by Alex Cohen and Debbie Flinner-Cohen, Pawnee House officially opened in mid-August — a delayed start thanks to COVID-19. But the owners will tell you the slower start allowed them to take their time and create a system that works.

“In a strange way, it sort of helped us,” Debbie said of opening during the pandemic. “Where we’d normally have 38 seats, we’ve started with 21. I’ve opened over 30 restaurants, and I can’t tell you how insane the first month always is.”

Together, the husband-wife team boast more than 50 years in the restaurant and catering world, and with this venture, Debbie has taken on the role as head chef for the first time. While she says she isn’t “professionally trained,” you certainly wouldn’t know it by trying the food.

I visited Pawnee House on a recent Sunday, ready as ever to indulge. As you’ve probably noticed by now, Oak Bluffs has been closing Circuit Ave. and the bottom half of Kennebec on Sundays so that restaurants are able to expand their outdoor dining. Pawnee House had a few tables set up outside — we requested one in the sun.

We sat down and were immediately struck by how many different and unique menu options there were. My boyfriend falls under the “avid meat-eater” category, and I could tell he was relieved to see several items that interested him. And myself — a vegetarian — plenty of picks for me, too.

Pre-1 pm drinks seem all the more justifiable during brunch, so I ordered a mimosa ($13), and my boyfriend went with the Naked Ox Pale Ale. There’s a pretty robust drink list, and a big bar inside, too. We also put in a starter, and you’ll want to write this one down.

The Beet and Goat Cheese Stack ($12.50) is flavor-packed, colorful, and filled with ingredients your body will thank you for. It’s made with two different types of beets — traditional red and the less traditional golden — packed in between layers of crumbly, soft goat cheese. The stack was topped with balsamic dressing and salted cashews, and sat on a small golden-green puddle of extra-virgin olive oil. My boyfriend told me he “doesn’t like beets,” but we split this starter right down the middle.

For my main, I chose the Country-Fried Skillet ($14.50) from the brunch menu. This dish is made two ways (and arguably three). For meat eaters, it’s made with country-fried steak with a medium fried egg plus home-fry-style potatoes, a biscuit, tomatoes, and gravy. For vegans, the dish is made with lightly fried green tomatoes, potatoes, more vegetables, and topped with a vegan gravy that you wouldn’t be able to tell was vegan (it’s all about the roux, Debbie told me). Since I’m a vegetarian, I sort of combined these two options. I got the fried green tomatoes but opted for the egg and biscuit as well. This hearty main is served in a hot skillet, and is absolutely delicious.

My boyfriend ordered the Chicken Pot Pie ($22.50) off the regular dinner menu — items from which are sometimes also available during brunch (just ask). It was made with a thick chicken-gravy blend encrusted inside a golden-brown flaky pastry that almost melted over the top of the bowl. It was filled with soft chunks of chicken, carrots, onions, and potatoes, and was warm, filling, and perfect for this time of year.

The Pawnee House, named after the historic four-story hotel that used to occupy that very street, gets its ingredients from a number of local farms, including Martha’s Vineyard Mycological, Grey Barn Farm, Mermaid Farm, and Kuloko Farm, among other partnerships that are in the works. Plus, Pawnee House sends all its compost to Pork to Fork. These choices are all nods to Alex and Debbie’s overarching mission: “We want to be as eco-friendly as possible,” Alex began, “promote healthy eating and a healthy lifestyle as much as we can.”

“We want people to feel like they’re eating something fresh every time they come in,” Debbie added. “Casual, no-frills — we want you to feel at home here.”

The Pawnee House, 20 Kennebec Ave. in Oak Bluffs, will be open through January, and is currently open for dinner Sundays, Mondays, and Wednesdays 5:30 to 9 pm, and Thursdays through Saturdays 5:30 to 10 pm. Pawnee House is open for brunch on Saturdays and Sundays from 10 am to 3 pm. For more information, visit thepawneehousemv.com or call 508-338-2770. 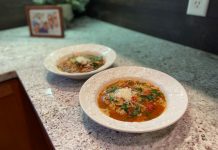