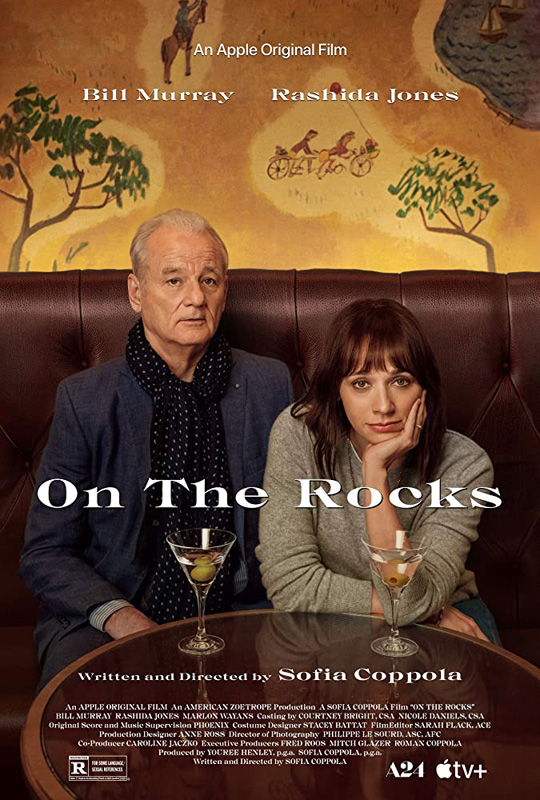 The Women in Film Festival will play at the Film Center on Friday, Oct. 16, through Sunday, Oct. 18, and will be available virtually until Oct. 23. Sofia Coppola’s appealing romantic comedy, “On the Rocks,” will play on Saturday, Oct. 17. It’s not to be missed, particularly by married couples.

After setting up the story with the wedding of Laura (Rashid Jones) and Dean (Marlon Wayans), Coppola moves the tale to the post happily-ever-after period common in marriage. Coppola teams up once again with Bill Murray, as she did in Oscar-winning “Lost in Translation” (2003). This time Murray plays Laura’s dad Felix, an aging philanderer and a bit of a con artist who meddles in his daughter’s life and marriage.

Laura is experiencing writer’s block despite an impending deadline. With time on her hands, she begins to develop suspicions about her husband’s loyalty. The problem is set up in a scene in which Dean listens to Laura’s voice, which causes him to interrupt their love making. It doesn’t help that Felix argues it’s natural for men to need extramarital liaisons. Laura’s suspicions are activated, since Dean is busy traveling to expand his new business. She also discovers a mysterious bottle of body oil in his suitcase. Her overactive imagination, which she should use in her writing, takes over.

After Dean announces he’ll miss Laura’s birthday, Felix insists on taking Laura to a fancy restaurant to celebrate. He gives her his handsome watch as a birthday present. It is, of course, a more romantic gift than Dean’s of a domestic Thermo-mix. Felix also warns Laura to check Dean’s texts. She discovers he has changed the password on his phone — more evidence that something is amiss.

Then Felix pushes her to tail Dean and Fiona in a cab at breakneck speed, until the police stop Felix and Laura in Felix’s back-firing sports car.

One of the funniest sequences comes when Felix chats up the cops, one of whom he seems to know, and cons them into pushing the convertible to get it started.

He shows Laura photographs of Dean, which are of her husband alone. Not that it seems to matter, but it does raise questions about Felix’s motives. Once Dean announces he’s going to Mexico for a conference, Felix convinces Laura he’s up to no good and whisks her off to Mexico. This scene is an idyllic interlude but one in which Dean never appears. When Dean calls on her cell phone to tell her he’s on his way home, Laura panics and tries unsuccessfully to beat him there despite bad weather.

The rest unwinds in this apparently disintegrating marriage. The pleasure in “On the Rocks” comes in the conversations the audience will enjoy that seem genuine and funny.

Information and tickets to “On the Rocks” are available at mvfilmsociety.com.