Charles T. Morgan, a West Tisbury carpenter and cabinetmaker with a trusting and generous nature, was killed on August 2, 2020, in a Florida hotel by a convicted murderer, robbing his daughter Mary of a loving father, his wife Jacqueline of a devoted husband, and leaving his friends and an Island community stunned by the senseless loss. Charlie had befriended his killer during an unexpected stopover while traveling to visit his father and brother in West Palm Beach, police said. He was 59 years old. 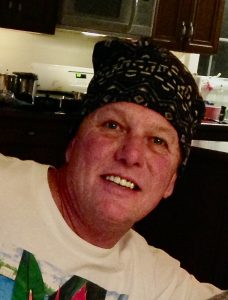 “He was old-school,” musician and carpenter Joe Keenan of West Tisbury said of his friend. “On the job, if you tried to talk to him and he was in the middle of figuring it out, he would simply ignore you. I never took it personally, and finally, after I figured it out, I appreciated him all the more. He was an old soul if ever I met one. He took a lot of knocks and was the kind that would get back on his feet, brush himself off, and say to the universe: That’s all you got?”

Charlie was born and baptized in the Catholic Church in Woonsocket, R.I., during a family visit on July 26, 1961. He grew up in West Palm Beach, Fla., a typical kid who enjoyed surfing, motocross, and hanging out with his older brother Dennis. Later, he headed north with a friend to Cape Cod, and began work as a cabinetmaker.

During Memorial Day weekend 1993, friends introduced Charlie to Jackie Flynn, who with her sister Karen Flynn and her brother Michael Flynn dished out fried fish, creamy chowder, and their signature and beloved bite-fries — fried, crispy baked potato pieces — at the Bite, a small shack on the road to Menemsha Harbor.

“The magic happened immediately,” Jackie said of that day. “We went to the Lampost and had a blast.”

At the time, Jackie and her sister lived in Cambridge in the winter and on the Vineyard in the summer, running the Bite full-time. In 1995, she moved to the Vineyard. Jackie and Charlie married on Nov. 6, 1999, at the Agricultural Hall. It was a typical Vineyard wedding, complete with Fred Fisher hayrides.

Jackie said the ceremony had one brief interruption. Charlie was so nervous that he had to excuse himself from the ceremony to be sick. He returned quickly, and grinning sheepishly, continued. The ceremony was not just words, Jackie said. “He met every vow in marriage with feeling and with heart,” she said. “When I got sick, he stepped up. He was as perfect a husband as far as anyone could be. He never let me down.”

The summer cycle of all-consuming work at the Bite dominated family life. Their daughter, Mary, was born on Dec. 9, 2000, a blessing and a joy to Charlie. With Jackie at work, Charlie and his mother-in-law, Barbara Flynn, shared summer childcare duties. Later, when Mary was old enough, she was part of a Bite crew that included lots of Island kids over the years. Charlie helped out behind the scenes and with repairs.

“He married my family, and he took it graciously,” Jackie said. When the couple were not working, they built a house off Lower Indian Hill Road while living in a trailer.

The summer cycle of work at the Bite ended in 2018, when Jackie made the very painful decision to close the business, on the site they had rented for 30 years, in order to care for her sister, who was in poor health. For the first time in three decades, Charlie and Jackie were able to enjoy an Island summer together, going to the beach and boating.

When Charlie got home at night, he always asked Jackie what she wanted for dinner. “He cooked for me all the time,” she said. “I miss my husband; he was so good to me.”

Charlie is survived by his wife, Jacqueline Flynn-Morgan, daughter Mary Morgan, father Virgil R. Morgan, brother Dennis Metivier, sister and brother-in-law Karen and Michael Flynn, and many uncles, aunts, and cousins, and the friends who loved him.

A COVID-safe celebration of life will be held in spring 2021. Donations in Charlie’s memory may be made to a bird-protection organization of one’s choice.