Martha Moore Schmidt died at the age of 90 on Friday, Sept. 25, with family by her side. Martha, Mar, or affectionately “Mouse,” was a wonderful wife, mother, grandmother, and friend to many. Martha was generous of heart to her family and those she met. With her wisdom, wit, and intuition, she welcomed all into her realm, two-legged and four-legged. She was a joy to be with, having an inspiring and optimistic spirit, a love of laughter and adventure, and deep generosity. Her love was all-encompassing. 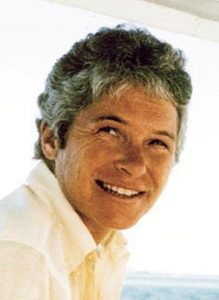 Martha was born in Tarrytown, N.Y., on Dec. 2, 1929, to Frederick Lee Moore and Ruth Chandler Moore. She grew up in the Ardsley Park area of Irvington, N.Y. and summered in Vineyard Haven. She attended the Masters School and Bradford Junior College. After graduating, she worked for Pathé News in New York City, and often commented how she reveled in her newfound independence there. She was an avid reader of fiction and current events.

She met Charles (“Chuck”) Wilson Schmidt on Martha’s Vineyard through sailing connections, and they married in Irvington in 1951. He was attracted to her sense of fun and sparkling joy, along with her beauty, inside and out. They shared many new homes throughout his career — New York, N.Y., Rochester, N.Y., Menlo Park, Calif., Philadelphia, Pa., Ardsley Park N.Y., Wayland, and finally West Tisbury in 2003. She faced the challenge of finding a house and new schools every four years. She particularly enjoyed returning to her childhood home in Ardsley Park, and spending every summer on the Vineyard.

Her Martha’s Vineyard roots were deep, beginning with her grandfather, whose Luxemoor Leather Co. in Vineyard Haven was founded by William Barry Owen in 1905. Her father spent part of his youth there, after which the family moved away, returning to West Chop every summer. In 1950 they moved up-Island to Seven Gates Farm, where on the lawn facing Vineyard Sound, Chuck asked her to marry him. Her brother Chandler Moore was well-known and loved as an Island character and a fine marine artist. Her other brother, Lee Moore, and his sons also summered on the Vineyard. Lee was a decorated Navy pilot in WWII. When Martha was 13, the family got a call from Lee, who surprisingly showed up for pilot training at the M.V. airport. Martha’s eyes sparkled when she told stories of visits from Lee and his handsome Navy air crew members.

She often said, “Salt water cures everything.” Growing up on West Chop, she learned to sail in Beetle Cats at the Vineyard Haven Yacht Club. She moved up to racing VH-15s with her friends and brothers. While she loved one-design sailboats in Vineyard waters or bareboating in the Caribbean, she was just as happy on a Sunfish in Vineyard Sound, as long as there was a good wind, or when accompanied by her dogs Kinsale, Gillie, or Lily. On her 80th birthday, rather than having a fancy party, she said, “I want to snorkel.” Skinny-dipping is a multigenerational family tradition.

Martha attended and was involved with activities at the West Tisbury Congregational Church. Nature called to her. She could not hurt a living thing. She was a creative and magical gardener. An avid member of the Martha’s Vineyard Garden Club, she was known for her daffodil walk at Seven Gates Farm, complete with her much-desired broccoli sandwiches and lemonade. Her love of nature inspired her children to be plant specialists, teachers, and land and ocean conservationists.

Martha was a friend and advisor to all. This made her a great correspondent, sending letters and clippings, and enjoying the return post. She especially liked receiving funny and witty missives. She was a paragon of hosting, creating gathering spaces for family, extended family, weddings, business associates, and Friday trips with Vineyard friends to the Boston Symphony. She was renowned for her beach picnics. She loved handing out treats — cheese and crackers, Humphrey’s cookies, Dove bars, dog biscuits, or the Schmidts’ famous rum drink, the Lipschmacker. She was an extraordinarily thoughtful gift giver.

Beyond sailing, Martha was accomplished at many other sports and games — tennis, alpine and cross-country skiing, hiking, and golf. She beat everybody bodysurfing a wave furthest up the beach. She loved sledding, even though she once broke her neck tobogganing at night. She was a mean gin rummy player. She was a trooper and would never complain, not even during a glacial ski expedition in Switzerland when she fell 50 feet deep into a crevasse, finally caught upside-down, hanging by her skis.

She will be missed by family and friends, and a large fan club of fellow churchgoers, garden club associates, friends from Chuck’s business and philanthropic ventures, shopkeepers, gardeners, painters, carpenters, plumbers, cleaners, and many more. She treated us all as equals, and made everyone feel special. She stays warm in all hearts because hers was so large and so open.

Donations may be made to the First Congregational Church of West Tisbury, or, in Martha’s memory, to your favorite Vineyard organization (Martha supported too many for us to choose). The church’s address is PO Box 3000, PMB 3111, West Tisbury, MA 02575.

A church service and celebration of her life will be held when we are all able to freely gather again.