Sarah Vickery Hammett of East Chop and Manchester-by-the-Sea, died on Oct. 6, 2020, after a courageous battle with lung cancer, with her husband and three children at her side. She was 89 years old. 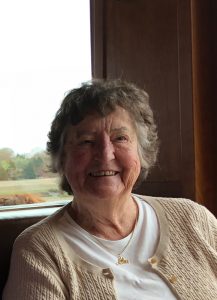 Born in Boston on April 21, 1931, to Victor Davis Vickery and Madeleine Converse Vickery, Sally was the youngest of two children. She grew up in Darien, Conn., and attended Thomas School before attending Goucher College in Baltimore. She graduated in 1953 with a degree in anthropology. Following graduation, she moved to New York City to work as an administrator at the Brearley School, and then in personnel at Rockefeller Brothers, working on the 56th floor of Rockefeller Center. While in New York City, she was a member of the Blue Hill Troupe, as well as the Canterbury Choral Society.

In 1956, she met the Rev. Robert Lee Hammett, the assistant minister at St. Luke’s Church in Darien, Conn. They were married on Sept. 28, 1957. Sally thrived as a clergyman’s wife. They first lived in Sharon, Conn., where Sally worked at the Sharon Clinic. In 1966 Bob took a teaching and chaplain position at the Emma Willard School in Troy, N.Y. There they made many good friends, and Sally was an integral part of starting a children’s school. It was during this time that she turned her love of needlepoint into a business called the Skipper’s Wife. In 1975 they moved to Middlebury, Conn., where Bob led the parish at St. George’s Episcopal Church and Sally worked at the Westover School in administration. In 1981 they moved to Needham, and Bob led the parish at St. John’s Episcopal Church in Newtonville. Here Sally worked at the Massachusetts Ski Club before starting Student Tours Inc., something that she was extremely proud of. Sally and Bob raised three children.

In 1962 they purchased a house on East Chop on the Island of Martha’s Vineyard as a place to put down summer roots. To the end, sitting on their porch and looking out over the bluff was one of Sally’s favorite pastimes. Summers on East Chop included hot days on the beach and a lot of tennis at the club up the street. Sally was a devoted tennis player; she inherited this from her father, having watched and played in many Labor Day tournaments while growing up in Noroton, Conn. As a teenager she cherished her summers at Camp Arcadia in Maine, and eventually worked there as a tennis counselor.

Sally also loved to travel. This started when she spent a summer in Europe with her roommates from New York, just before marrying Bob. During their marriage Sally planned trips to Europe and Israel with friends from Sharon, and she and Bob spent several summers on “parish exchanges” in England.

Sally and Bob moved to the Vineyard year-round in 1994, after Bob retired. She brought Student Tours along with her, and she worked with her son Rob, who eventually took over the business. Sally made the East Chop House home base, where the family would gather at holidays and during the summer months. She enjoyed spending time with her seven grandchildren, who either lived next door or descended during the warm months to take in all that the Vineyard had to offer.

Expanding from her talent in needlepoint design, Sally also enjoyed knitting and quilting, and was a longtime member of a sewing group on the island. Sally also enjoyed antiques, and had a real flair for renovating and decorating houses. She oversaw the winterization and expansion of the East Chop house before moving there full-time in 2009.

In 2015, Sally and Bob moved off-Island to Thirwood Place in West Yarmouth, and then recently to Manchester-by-the-Sea, into a small cottage behind the house of their son Whitney and his family.

Sarah leaves behind her devoted husband of 63 years, Robert Lee Hammett; her three children and their families, Robert and Deborah Hammett, and their daughters Rilla and Emily; Lee Hammett Peterson and her children Gretchen Anstett and Douglas Peterson; and Whitney and Allison Hammett and their sons, Noah, Eli, and Walker. She is also survived by her sister, Joan Vickery Davis, her nephew, Timothy Davis, and her niece, Polly Davis.