In this age of Zoom, with live, on-stage theater just a fond memory for the time being, the Martha’s Vineyard Playhouse is presenting the second in a series of online readings this coming weekend with a presentation of the two-person play “The Niceties,” directed by Joann Green Breuer and starring Amy Brenneman and young actress Tsilala Brock.

The play, written by Eleanor Burgess, features two strong-willed women facing off over the course of a meeting between a white college professor and one of her students, an outspoken African American political science major and activist, during the professor’s open office hours. Called a “barnburner of a play” by the Washington Post, the dramatic encounter begins as a polite clash in perspectives before exploding into a debate about race, history, and power, and eventually leads to a real-life power struggle between the two women.

The play has been produced at theaters throughout the country. In a review of a production at Manhattan’s City Center, the New York Times described “The Niceties” as “a bristling, provocative debate play about race and privilege in the United States.”

Playhouse artistic director MJ Bruder Munafo says that she found the play to be the perfect vehicle for Zoom, since it features only two actors, evolves in real time, and as a stage play, would require only one very minimal set. She also sees the play, which is set during the last year of Obama’s second term, as very relevant during this time of increased awareness of issues of race.

“Plays with a social conscience and plays about Black lives have always been a part of our repertoire,” she says. “This year, the Playhouse, like a lot of theaters, is focusing more deeply on those issues.”

Earlier this year, the Playhouse, along with Rosalind Productions, presented an online reading of “Crumbs from the Table of Joy” by Pulitzer prizewinning playwright Lynn Nottage. This memory play set in 1950s Brooklyn deals with a Black family coming to terms with some radical changes in their lives.

Bruder Munafo had “The Niceties” on her radar for some time before the Playhouse was shuttered due to COVID-19. She decided that a Zoom reading of the play would fit well into their digital-only schedule this year, and she was thrilled to have Brenneman sign on to the project. The five-time Emmy nominee, who is best known for creating and starring in the CBS drama series “Judging Amy,” has performed at the Playhouse in a number of staged readings.

As well as her career as an actress and producer, Brenneman has forged a reputation as an activist supporting the prochoice movement and gun control, among other things.

The role of the student will be read by New York–based actress, singer, and dancer Tsilala Brock who has numerous theater, TV, and film credits. Among other things, Brock served as assistant dance captain and swing for the “Book of Mormon” national tour. In the past she has appeared in two M.V. Playhouse productions of Shakespeare plays at the Tisbury amphitheater.

Director Joann Green Breuer has a long history with the Playhouse as a director. She previously taught acting at Harvard University, where she also served as faculty advisor for the student Experimental Theater. She co-founded the multi-awardwinning Cambridge Ensemble, and has written books and plays.

“The Niceties” will stream live on Zoom on Wednesday, Oct. 28, at 7 pm. A recording of the reading will be available for three days after the live reading, Oct. 29, 30, and 31. Proceeds from the $15 ticket price are earmarked for two organizations — Boston-based Union of Minority Neighborhoods and Movement Voter Project. Visit mvplayhouse.org for updated info and to purchase tickets. 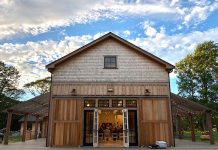